It is a sad day 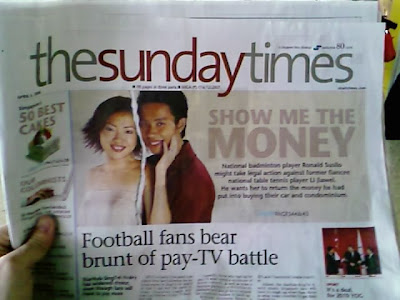 It is a sad day for football or the whole local sporting fraternity, if you do, as well, consider the ugly spat between shuttler Ron Susilo and his former fianceè Lee Jiawei.

First, many fans have to resign to the reality that they will have to fork out more to enjoy top-notch football on television (personally, I don't consider terrestrial channels free either since there's the annual TV licence fee that tagged with your property tax, remember?)

Blame for the small consumer size that we have that we are being charged at a rate we consider a "rip-off".

In the spirit of the "free market", the MDA (the relevant authority) stand firm on its "non-intervention" policy, despite a huge public outcry.

Yet, the sad thing is that they are still plenty of guys willing to pay that ridiculous subscription, just to meet their "temptation" (see the "cut-out"picture above).

I'm sorry but I would say these lots are PATHETIC and I hope they aren't the ones also complain about the high rising living costs.

Second, pertaining that ugly spat that grabbed the headline of "The Sunday Times".

I can't be bother to talk in depth about the "supposedly" golden couple, but rather because these two national athletes are roped in through the controversial "Foreign Talent Scheme" that they are ought to be accounted for whatever they are doing, publicly or even privately.

"SHOW ME THE MONEY", screamed the daily's headline, that rarely spotlighted on local sporting scene, would have shocked everyone in this island, who last heard the two split amicably.

Not surprise if there are those "hard-core xenophobic" rolled up and tossed the page or shredded into pieces and bang the table on such folliness that occurred.

Some must be pissed at the monetary rewards handed out for achieving those sporting glorys by those naturalized citizens.

Email ThisBlogThis!Share to TwitterShare to FacebookShare to Pinterest
Classifed as: media, Public education