[Instant Reaction] Hamstrung (further) for the sake of ROMANCE II

By Ko Po Hui April 03, 2012
(P.S: That's precisely why "Instant Reaction" is an essential tag in this blog for cases as such) 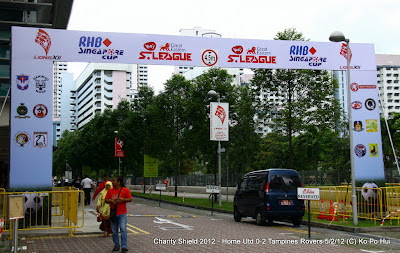 The latest roll-out this morning by the league authority informed that fans who purchase two adult tickets at selected S.League matches with entitled a complimentary King George’s Stand ticket for the Malaysian Super League (MSL) match between LIONSXII and Perak, 10th April 2012.

I am not very sure how well does it say for the whole situation, even though, the league authority in their statement stated "Fans of the S.League will now have a chance to combine their love for local football when they buy S.League match tickets."

Although, I am not kind of opine in the same perspective when the S.League itself it trying get its house in order, and initiative as such would make one wonder if the earlier projection of that of the "spill-over" had failed to revive the scene?

Rather than hoping the projected "spill-over" effect they longed for would take place, it seems that the relevant authorities are leaving no stone unturned in its latest effort to resuscitate the gradually dwindling crowds on either Tuesday and Saturday's matches at the JBS with the help of "the-other-way-round".

I think I wouldn't have much an issue if similar effort is shown to boost the profile of our clubs' involvement in the AFC Cup (remember 20th of March?), but the latest move is just unacceptable and not necessary at all.