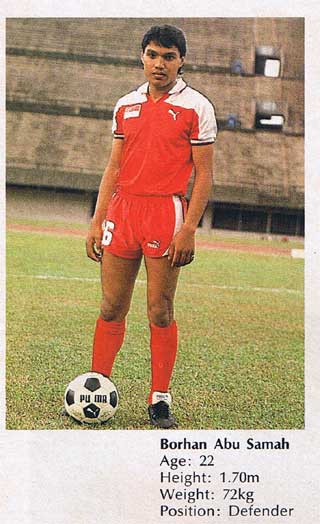 It was only from my Facebook feed that I came to know today's significance.

Twelve years ago today, Singapore football mourned the loss of one of its best players - Borhan Abu Samah aka "Russian Tank".

Known for his tough and uncompromising tackles during his days, the former Lion, who once ply his professional trade with the great Pahang side in the Malaysian League that featured the likes of Fandi Ahmad, V Sundramoorthy, Dollah Salleh and Zainal Abidin Hassan, succumbed to liver cancer that ended his life at the age of 34.

Made his first debut for the Lions back in 1987 in the Olympics Qualifiers against Indonesia, Borhan scored his only international goal in a 4-1 win against Qatar in an international friendly in 1989.

In the least I can do for this great player is to pay my tribute to him for what he done for Singapore football through this blog entry...