By Ko Po Hui August 31, 2011
(P.S: If you access this site via "come.to/matchpix", please click the "Facebook" icon after you click "HERE" when you want to view the album as that will redirect you to the album, thank you)

Ahmad Latiff (pictured above in yellow jersey) delivered the sucker punch at the last kick of the game to help Tampines Rovers beat Balestier Khalsa 1-0 at Toa Payoh Stadium.

While the Tigers had a Mark McGough's goal disallowed which they claimed the Aussie's effort had crossed the goal line before Lions defender Fahrudin Mustafic cleared for safety in the first half.

The win closed the gap to two points between Stags and leaders Home Utd.

With the horrendous light condition at Toa Payoh, compromised at 1/320 and ISO6400 is a must when F5.6 is the main theme here. 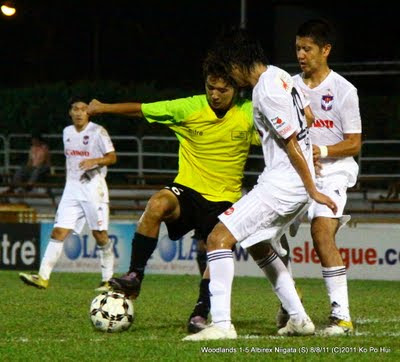 "Woodlands had a 3 week break. trained twice daily for two weeks, led thru a 40sec goal and then crumbled and got trashed. and he (coach Bala) still say its ok" said a friend on "twitter" after he read what I quoted Woodlands coach R Subramaniam said after his team's 5-1 defeat to the League Cup holders.

"Despite the loss, I still see some positives out from this game and compared to our last game against them, we actually made them worked hard to score all the goals tonight.

And I felt it was due to the fasting month and being our first game during this period, I think my team will adjust to the condition by the time when we play our next game." was what said by Coach Bala after the game.

By this time, it was already a well-known fact among the fraternity that I must be the only photog making a hell of noise of the poor lightning at neighbourhood grounds when one of the Rams players asked me before the game if that would be the worrying factor when snapping them later... I think it was.. :P 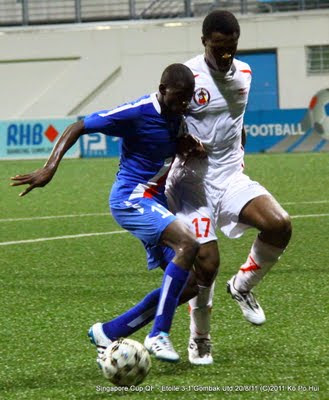 Gombak Utd coach Darren Stewart took full responsibility for their 3-1 loss against Etoile FC that saw them knocked out of RHB Singapore Cup.

With that win Etoile will meet Home Utd in the semi final of the premier Cup competition of local football alongside with Albirex Niigata (S) and Hougang Utd to complete the FINAL FOUR setup.

It was raining pretty heavily prior to the start and I asked the water-logged pitch was possible for the game to start.

And glad it did and so was the rain that stopped in time to see the start of the match that went without going into extra-time unless those other's second-leg matches before this.


PLEASE CLICK HERE TO SEE REST OF THE MATCH PICTURES