Would a "PLAY-OFF" system sustain the league? 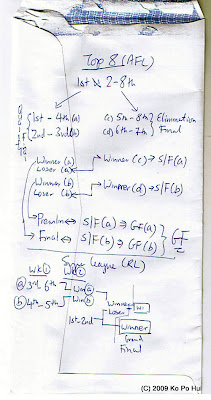 Click on the "envelope" for a bigger view
Scribed this on the back of an envelope.

Please don't be confused by those "arrows" and the hideous handwriting (it was a scribble-on anyway), allow me to explain with some helps from the "wiki" pages on the subject.

As you can see for yourself on the top of the envelope, I scribbled "Top 8 (AFL)", while at the lower half of it, you should noticed the words - "Super League (RL)".

With SAFFC very likely to warap up their unprecedented "fourth-peat" (their fourth consecutive league titles) in days to come, I wonder what's the point of carrying the regular league fixture since there's nothing more to fight for (except for the remaining prize monies)?

Since there's no relegation/promotion format in the league set-up, the rest of the pack are merely fighting for their pride to complete their fixture, thus there's absolutely no reason for fans to pay to come and see some meaningless games.

Having said that, I came to realize some sporting leagues around the world have been adopting some kind of "play-off" system for those top teams as a "reward" of doing well at the end of their regular season (completion of the fixtures).

Which is why I would like to borrow example from both the AFL (Australian Rules Football) and Super League (Rugby League)'s play-off system to see if it could fit into our league system.

The AFL "play-off" format (text borrowed from "Wikipedia")
The Super League "play-off" format (till 2008) (text borrowed from "Wikipedia")What we learn from it?
Like the American sporting system, the AFL operate on a "franchise" system (correct me if I'm wrong as this is based on my observation) while the Super League in England will implement a "Licensing" system in their coming season.

Both league formats don't have the "promotion/relegation" system, so year in and out it'll be the same teams pit against each other, which is something similar to our own S.League format.

Let's face the fact that it's absolutely impossible to implement the "promotion/relegation" format in the league setup, given the unfavourable climate local football is facing now and the lack of sizable fan population, so why not give a thought of having something that might just work for us?

A Suggestion (Please refer to the chart below, before you proceed on) 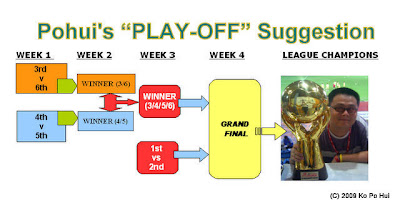 Click for a bigger view
With the completion of the regular season (the current format we having), the team that finish at the top of the league ladder will be declared as the "minor premiers" (a similar term using in AFL, depicted as "1st" in the above chart).

Together with teams that finished at the second (2nd) to sixth (6th) position of the standing, these six teams will enter the next phrase of the season - THE PLAY-OFF (based on the discontinued "Super League" play-off format).

Being the "minor premiers" will entitled itself to some form of advantage, that is it will be awarded a trophy, cash monies for that achievement and a "bye" in the qualifying stages (as illustrated on the chart above) where they will only play against the team finished at the second position of the standing in Week 3.

The winning team of this fixture - the "minor premiers" and the "2nd" will be one of the finalists in the "Grand Final" that ultimately decide the league champions.

While for those remaining teams (3rd to 6th positioned), their fate in this post-season stages would definitely be tougher as compared to the top 2 teams since they will have to endure some gruelling "knock-out" fuels against their opponents before they can proceed further.

The Conclusion
The whole idea of this "play-off" format, is to avoid having those "meaningless" fixtures after a league champions are declared with few more rounds of matches to play.

This system should be served as an incentive to those "top-tier" teams to fight for better position in order to avoid those teams they would not want to meet in the early stages of the "play-off".

And most importantly, as the league authority have no plan of implementing the "promotion/relegation" system in anytime near future, the "play-off" should help to inject some form of excitement we would normally seen in those relegation dogfight.

(P.S: Thought of posting this suggestion days later, but decided it's time to let it out)
logged down by Ko Po Hui at 23:35:00