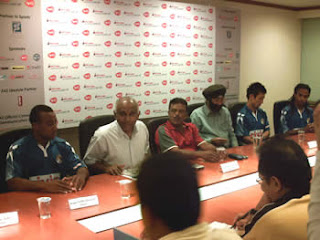 Happened to pop in to sneak a peep at one of the teams' introductory press conference.Balestier Khalsa was the team that presented itself to the media at Jalan Besar.

Right from the start, the Tigers' vice-chairman did not minced his words as he bemoaned the short-comings of the game's youth development in this country.

Stressed that it's not only Balestier that facing this problem but many of the smaller clubs.
Thava, as he is popularly known, lamented that once a player being nurtured by one of those smaller clubs, would never see him return to his nurturing club after national service due to various factors like:-

Citing this example, he mentioned some clubs virtually not focusing much effort on developing young players.

As such, he pleading the media to highlight and hope all parties will come forward to address this issue for the betterment for the game's future here.

On the hindsight, he hopes the success of the national team in the Asean football championship could serve as a "platform" for better things to come in terms of fans' interest and better media coverage.

Too bad, times running for me as I exited the venue before everything is over :(