I finally got LEECHED!!! 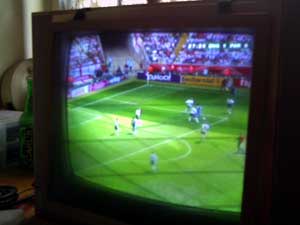 Thought everything was in placed for the day to come (i.e: the opening fixture of this year's World Cup).

Sourcing out the alternate sources to see the games for free, had been the top most priority for me after it was announced that the cable provider (Starhub) had decided to opt for a PPV for the "Greatest Show on earth".

Of course lah, the public outcry was there when the bad news was announced but the Singapore mentality is that, after "making hoo-ha" initially, the general public will eventually give in and "be a good boy" (accept the reality).

Was ready to tune in to my alternate sources (eg: the RTMs, the live streaming via the internet) on the 9th, only to realise that the heavy traffic had made the viewing over these sources - MISSION IMPOSSIBLE !!

Probably, the only good thing about the sole cable provider, is that upon calling them, the channel 27 and 28 were ready for viewing in just matters of hours

The thought of installing those old-fashioned antenna don't fancy me much, as my home unit is not an ideal place to receive those free-to-air channels.

Eventhough, "Mac" (picture below, took at Braddell Mac) is just minutes away from my home, still the laziness of walking put me off

(inside the "Mac" itself, the screen on the left of the picture) 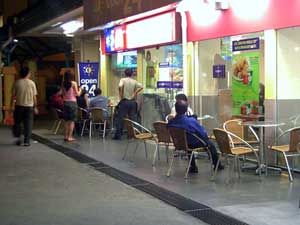 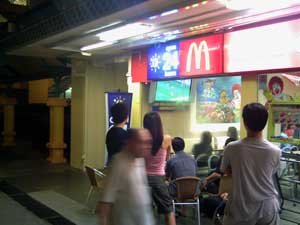 (outside the "Mac", chairs and tables are in placed to anticipated the onlookers)
Therefore, with little option left, there goes the 15 bucks to the provider, a hard, bitter pill to swallow having known our fellow fans in neighbouring countries can see the matches for FREE, at the comfort of their home.

For those, don't mind squeezing around, the 30 "Mac" around the island are always there to welcome you.

(PS: at the time of writing this, crowds are streaming into Braddell Mac for the match between T&T vs Sweden, with the waiters on standby mode to serve us all, after all it's BIG business after all)
logged down by Ko Po Hui at 23:50:00