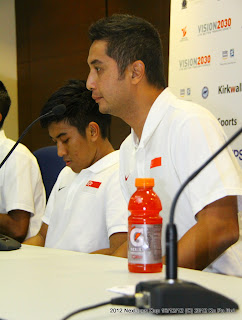 Former Singapore skipper and ex Hougang United coach Aide Iskandar (pictured left, on extreme right in the recent NexLions Cup post-match press conference) is taking over from his one-time Lions colleague Robin Chitrakar as the new head coach of Courts Young Lions in the upcoming S.League season that is scheduled to kick off in next month.

Having helmed the Singapore Youth Selection to a credible performance against the likes of Manchester United and Liverpool academies sides in the recently held NexLions Cup, it's "a(n) unanimous decision that Aide Iskandar will best fulfil our long-term objectives" said the selection panel in the media release issue by the Football Association of Singapore (FAS) this evening.

Commenting on the appointment of the 121-cap Aide, the FAS president Zainudin Nordin said:"Aide had an illustrious playing career during which he clinched honours at both international and club levels.

"As a coach, Aide has demonstrated leadership and maturity and we believe he will have a positive influence on the Courts Young Lions players, many of whom have the potential to be called up to the national team within the next few years." added the MP for Bishan-Toa Payoh GRC.

In the same statement, coach Aide also shared his thoughts on his new appointment that see him return to the S.League after he departed from the Cheetahs at the end of 2011 season.

“I had the invaluable opportunity to work with many of the Courts Young Lions players at the recent NexLions Cup and I am confident that I can play a role in enhancing their development which will in turn boost the national team in the next few years." said coach Aide.

"I look forward to the challenge of preparing our Under-21 players to compete against professional teams and players in the 2013 S.League season and also towards playing a key role in boosting youth development in Singapore.” said the 37-year-old former defender whose first task will his team friendly match against follow S.League club Tanjong Pagar United on the 16th January at Jalan Besar Stadium.
logged down by Ko Po Hui at 21:25:00

Email ThisBlogThis!Share to TwitterShare to FacebookShare to Pinterest
Classifed as: S.League, Young Lions