Ticket information for the 2009 Sultan of Selangor Cup

This eighth edition of the Sultan of Selangor's Cup, that is hosted by Singapore for the third time, will be played at the Jalan Besar Stadium on Sunday, 4th October.

The main match between the Singapore Selection and Selangor Selection will kick off at 7.30pm, while the curtain-raiser match between both Veterans team featuring football legends the likes of Fandi Ahmad and Dollah Kassim will start at 6.15pm.

Upbeat performances by Revalina and Bloco Singapura will entertain the early arrivals from 5.00pm onwards on matchday, with lots of cash and attractive prizes to be won during the half-time game. 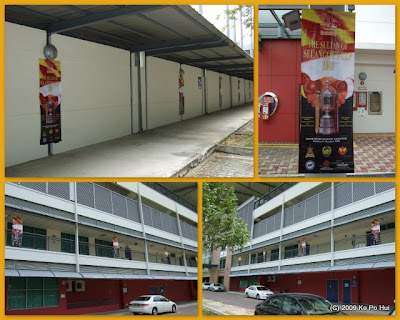 Just came back from Jalan Besar Stadium and saw these posters hanging around the stadium, maybe the organizers should explore the possibility of having some of these banners hang on the lamp posts along Jalan Besar (as depicted in the map below - the dark blue line) to attract more publicity, as that stretch of road towards Rochor Road is a busy road.