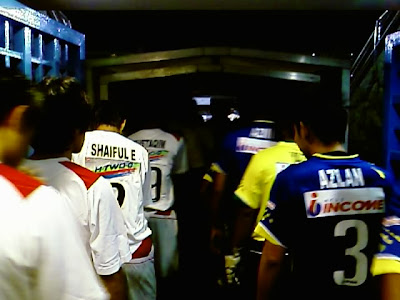 Both Woodlands (in Blue) and SAFFC (white) players heading their way out of the tunnel.

It is not very often I get a chance to be at the tunnel right before the teams troop out to the field.

I was at the Woodlands Stadium last night, shortly before the guys were making their way out to the pitch.

Some friendly gestures like handshaking, tapping and pat on the shoulders, some pleasantries were made among the players (unlike that fight in the tunnel between Man Utd and Arsenal years back!!), who, after all, know among themselves each other pretty well.

Among those whom I met was Woodlands' Korean star Park Tae Won.

But he was not featured in that game as he is still nursing a calf injury, however he did mentioned that he should be ready for the Rams' next fixture.
logged down by Ko Po Hui at 21:39:00