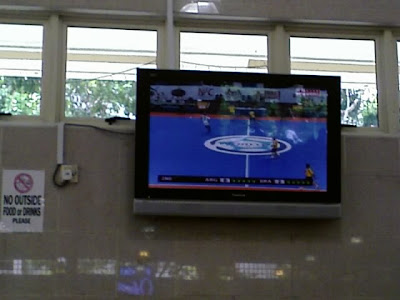 I was having my lunch a while ago at a foodcourt near where I stayed, and saw the repeat telecast of the "KL 5s" futsal match between Brazil and Argentina.

Only then, I realized that how long it is we last saw a high standard display of the indoor version of the game on this island, when the bi-annual "Tiger 5s" was held in the Singapore Indoor Stadium from 1997 to 2001 before the organizers decided to shift to Kuala Lumpur and renamed as "KL 5s".

I still recalled when I attended the final day of the event in 1997 (the ticket stub is the proof), how electrifying it was and definitely worth every money paid.

In the end, it was the Spaniards who triumphed over the red-hot favourites Brazil in a thrilling final that stretched past 11pm!

So when the organizers decided to pull the plug and headed north, I was angst as there's no way I could able to catch such a high-quality display of the 5-a-side version.

Since then futsal scene in Singapore seems to be pretty quiet and except for some occasion tournaments organized by those non-official bodies.

I guess at the meantime, I should be contented by having this souvenir air horn given out during the tournament as a reminder of those wonderful days...
logged down by Ko Po Hui at 16:35:00