Which is why I would like to highlight a point regarding writing to the feedback/opinion section of any major dailies.

As you can see for yourself that both letters were written by the same person "Jason Chiam".

However, due to the space constraint or whatsoever reasons, the letter need to be edited before publish them.

Which sometimes I don't understand why? I mean those guys, who wrote to the papers, already done their proof-reading and editing before submitting but once in the hands of the editors, who might carelessly re-edit some part of the letter "out-of-context" and tweak the whole story!

Anyway, good thing Jason wrote this letter as it prompted the SSC, the landlord of the National Stadium, to reply the query of many (as below).. 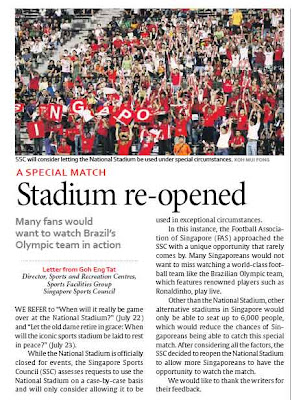 Thanks a lot, Jason and hope it does answer everyone's question.
logged down by Ko Po Hui at 22:07:00