Some thoughts on Sinchi FC

Just came back from Bishan stadium, after witnessed the showdown between Home Utd and Sinchi FC Some people may thought what a lousy night to spend a Saturday night watching such an unattractive fixture. 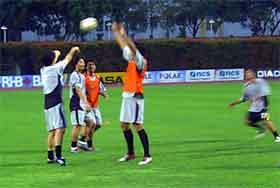 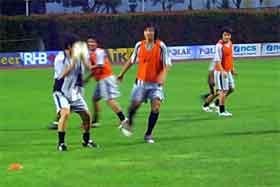 When l first saw the Chillins conducted their warming up (as shown in the above pictures), thought these guys were having the wrong idea that they were handling a ball instead of kicking one.

Anyway, it is almost a fact by now this Chinese-based club will be part of the setup next season (much to the dismay of some fans, of course).

However, it casted a bad light for the team's vice chairman Wang Jinhui, who repeated not more than once that this will be the end of the Chilins in Singapore soccer, if they failed to achieve their target.

The $700,000 carrot dangled by their sponsors had made the Sinchi 's management changed their mind.

The main fault of this team is that, they dont seems to able to assimilate into the Singapore football culture.

Initially, the talk of tapping the huge expatriate Chinese community as their fan base, failed to materialize as the club remain the most "unattractive" side.

The allocation of the team to Jurong stadium proved fatal too as with only one bus service from Boon Lay interchange to the stadium, who would bother to venture to the "wild, wild west"??

As one newspaper already pointed out, Chilins must pull their socks up and get into full throttle by fulfil all the neccesary requirements laid by the FAS.

By suggested that they will follow their Japanese counterpart Albirex Niigata's footsteps, having a feeder squad of a Chinese Super league club, let's hope they have found the right formula.