By Ko Po Hui July 23, 2015
Despite going down in the two matches they play against their much illustrious opponents, many people which included the likes of Stoke City's manager Mark Hughes and his Arsenal counterpart Arsene Wenger, lauded the performance of the Singapore Selection in the just concluded Barclays Asia Trophy. 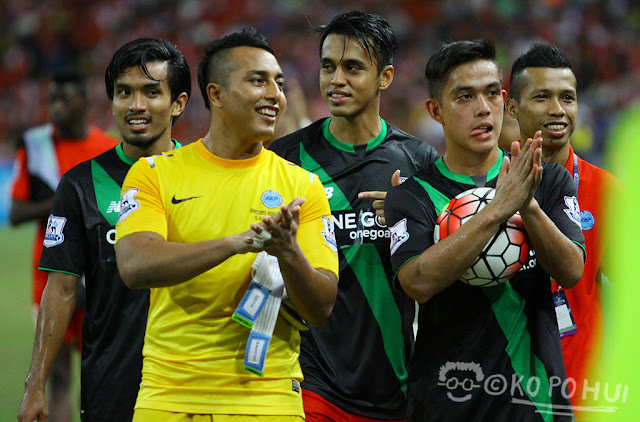 Two players in the picture above - Zaiful Nizam (second from left) and Shahdan Sulaiman (middle) are the two of those worth mentioning for the efforts shown by the hosting side during the tournament that drawn a record crowds of 81,974 to this event since its inception back in 2003.

Just last November on the same ground saw a horrific injury sustained by Shahdan during the Suzuki Cup that saw him out of action until his return, merely weeks ago with Lions XII in the ongoing MSL campaign.

Also during that period, Zaiful with his wife were spotted among the crowds watching the Lions in action then against the eventual winners, Thailand.

While the two players were team mates during the 2005 Lion City Cup, the route undertaken by both since that juncture were rather different.

Midfielder Shahdan went on strength to strength to establish himself as a key member of the Singapore national team, featured for local powerhouses like Tampines Rovers and Home United with various accolades under his belt.

On the contrary, Zaiful only collected his first cap when he came on as a substitute against Brunei in early June, despite being a consistent performer in the S.League with Gombak United and Balestier Khalsa in recent years that was aided by his notable outing for the Tigers' in their AFC Cup campaign this season.

Recalled that November night when he watched the home side lost 2-1 to the War Elephants from the stands, the the 28-year-old custodian said:"While I knew that Thailand was a strong team, however, I believed that we could have beat them in that match.

"Yes, it was my wish to be called up for the national team for that Suzuki Cup tournament after which I thought I had a good run with my club (Balestier Khalsa) last year but I guessed my time wasn't ready back then and glad I am now given the opportunity after my performance in both S.League and the AFC Cup."

Although came on as a replacement for Izwan Mahbud late in the second half against Stoke City in the third/fourth placing playoff, the 1.74 m 'keeper is contented for the opportunity to face against a high calibre side.

Said Zaiful:"Even though it was only just ten minutes on the field that day, I felt like I earned a cap by playing in our very own National Stadium which is a dream for any footballer in Singapore and also a good learning experience to play against an EPL team."

In contrast, the 55,000 capacity arena incurred some mixed feelings for Shahdan when he stepped onto the field after a lapse of eight months.

On that leg fracture that sidelined him for months, the 27-year-old recalled:"There were flashes of what happened last time, when I stepped onto the pitch but it didn't really affect me,

"The nervousness mostly come from the thoughts of playing against the big stars (from the EPL sides)." he added.

"I was very surprised by my inclusion in the squad, I didn't believe it at first as I haven't really started playing when the list came out." on being included as part of the Singapore Selection that caught him off guard.

Earlier report indicated four-sided tournament would be served as platform to get things ready for the Lions' next World Cup qualifying (WCQ) match against Syria in September. With Selection coach V Sundramoorthy started Shahdan in games against Arsenal and Stoke City, would it mean he is now back in the radar of Coach Bernd Stange's plan?

"I am very thankful to Coach Sundram for calling me up and have faith in me for started me in both games (against Arsenal and Stoke City)," said Shahdan. "As for the (Lions) call-up, I just want do my best for Lions XII to prove my worth to the national selectors and continue where I left behind before my injury to become a stronger and better player."

The intend to pursue for better performance for both self and team is echoed by Zaiful as well, when he shared his thoughts too.

"On club level, I still want to achieve something and finish on a higher note in the S.League," said the shot-stopper. "For the past two WCQ matches (against Cambodia and Japan), I thought we did well and hope we will do our best in the upcoming games in order to qualify for the next round of the qualifiers, which I think we have a good chance with the good players and coaches in our setup."