I blogged something about club merchandise based on what I saw in Australia years ago, and added that there must be some essentialities that would prompted the supporters to part their cash on these items, other than showing their affiliation to the clubs they follow.

Which is why I implied that concept in my recent trip to Taipei, where I was there to catch two baseball games featuring the CPBL side I follow - the Brother Elephants.

One of essential items that baseball is associated with is, of course, the cap. 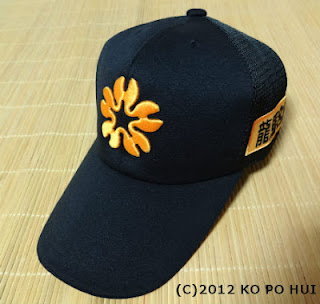 THE CAP
For good reason, the eyeshade of the cap is essential in blocking off the rays from the floodlights or evening sun that might affect the vision when watching the games.

The cap (pictured left) I bought at Taipei is a wire-meshed cap that is exactly the same headgear being wore by the players.

The porous design of this cap actually improves the ventilation that keep the players cool while playing the games.

Other than caps, there are other types of merchandises on sale at the Elephants' home games at the stadiums that caught my eyes too. 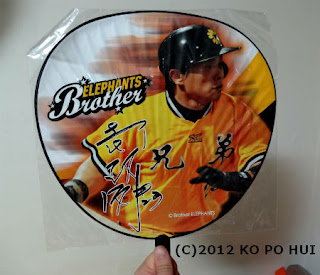 THE FAN
Being a top player in the CPBL, it's not surprise to see anything relevant to Peng Cheng-min (彭政閔) appeared on items such as a giant fan (pictured right) which I bought that depicted this favorite slugger of my.

This giant fan came useful during the game that was played in humid climate and not only cool myself, but also those who sat near to me.

WALK INTO THE LIFE OF FANS 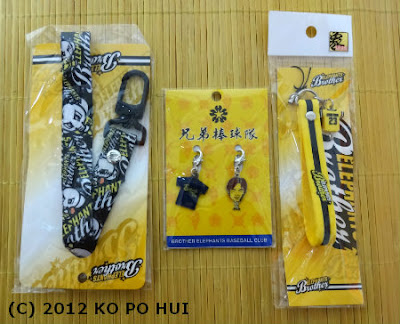 While the above mentioned illustrated the usefulness of some of those merchandise mentioned, what is more important on how CPBL clubs, through these merchandise, "walked into the aspects of life" of its supporters.

The likes of T-shirts, keychains (pictured above), tumbler are some of those daily essentials made available for these supporters to express their affiliation to the teams they follow.

BLEAK OUTLOOK FOR S.LEAGUE MARKET
While there are also club merchandise made available in S.League, but a check with some in the fraternity suggested a gloomy outlook.

The lack of funds and demand are being some of the reasons holding the clubs back from venture forward to come up with more varieties.

"With most players are on a season-long contract with clubs, it does make it impractical to have their images depicted on merchandise, as we aren't sure we going to have them back the following season or not." said one club official I spoken to citing the lack of long-term playing contracts offered to allow this area to grow.

The absence of a sustainable market is what opined by another club official is another stumbling block from moving out of the doldrums.

"There's a possibility of having one of my star players' image being used for merchandising purpose, but it just that the demand is not there." said this official in text conversation on this issue.

"It's not that we didn't try to tap on this area, otherwise, 'Playline' won't collapse in the first place." he added cited the case of the vendor whose vehicles back in the 1996 season would be at games selling varieties of merchandise that had gone bust since.

In his parting shot, this club official went on defused another misconception by saying :"Most Singaporeans think our S.League jerseys are too expensive. I am only selling $50." (That's pretty affordable).
logged down by Ko Po Hui at 21:49:00