Feet Dragging (nothing new, but...) [edited]

The feet-dragging on various issues pertaining the S.League is not doing any good if the league authority is keen to have the struggling competition back on its feet.

With mysteries of the identities of Winston Lee's replacement for the league's CEO, the 13th and 14th team still looming large, plus the near "black-out" on S.League coverage on the mainstream media in recent weeks have further inflicted more damages it can ill-afforded to.

Despite assurance from the top that this country's domestic league will not play second fiddle once January comes, but given things that happened of late with earlier mentioned, would be too late if those issues are to be left to the eleventh hour again (nothing usual in local football scene)?

The failure to allow the dust settled when February comes (when the S.League is scheduled to kick-off), would only see us walking through another "sand storm", unless the person who is going to drive us through knows the way when the road ahead of us is poorly-marked out.

If not, what's the point? 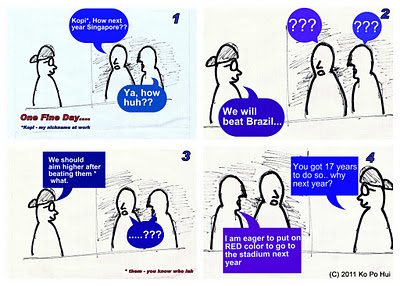 I decided to replace the "Skull" head with this comic strip that more or less related to the present situation now (at least to me now...)
logged down by Ko Po Hui at 10:17:00