Another round of Rams-Tigers exchange... [edited]

By Ko Po Hui December 22, 2011
I'm not sure if anyone of you out there notice this scenario since the early days of the S.League that there are these two clubs been "close trading partners".
It's not uncommon to see players of this particular club swapping jerseys for another particular side after a season or two that in recent years seems to have intensified.

As what I recalled that while there were some controversies surrounded the transfer of then Woodlands Wellington star striker Dalis Supait (pictured left in Balestier Central outfit) to Balestier Central (now known as Balestier Khalsa) in 1997 season, but that should also marked the beginning of such "close trading ties" between the two with English striker Paul Robinson heading the same route in 1999.

Following that some notable transfers between the two included the likes of Korean star winger Park Tae Won and Japanese midfielder Akihiro Nakamura.

When both these East Asian aces left the Toa Payoh outfit for a greener pasture of the Rams then, it was a contrasting ending for both Park and Nakamura.

Whilst Nakamura (pictured below) saw his career re-stabilized at Balestier after journeyed around the island and left the club on a high note to play for the Rams, it wasn't a really pleasure stay at Toa Payoh Stadium for Park after his transfer from the now defunct Jurong FC.

Being the supposedly cornerstone of the "Koreanization" at Balestier under ex-Malaysia Cupper Jang Jung, pacey Park wasn't able to replicate his Cobras' form that was feared by many defenders in the league (I still vividly recalled the argument he had with the chairman after a game and saw stormed into the dressing room) and left for Woodlands after one season. 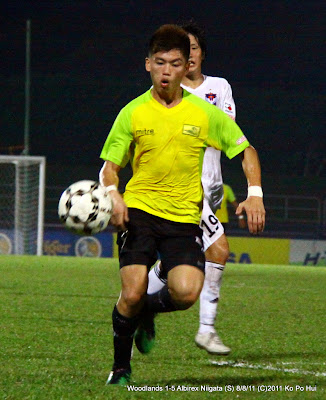 Since then, players like Anaz Hadee, Hafez Mawasi, Goh Swee Swee (pictured above), Han Yiguang, Ahmadulhaq Che Omar, Armanizam Dolah, etc. are some of the names that donned the stripes of the two in recent years.

Particularly for goalkeeper Ahmadulhaq who is reportedly heading back to Woodlands for a second spell after he was released by Balestier recently.

Interestingly enough, he will be joined by Daniel Hammond too, he is back with the northern side on a second spell as well following his move to Balestier in 2010 before heading to SAFFC and Geylang United this season. 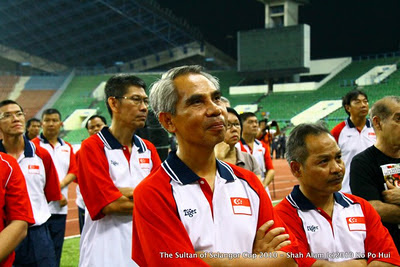 To complete the cycle of the talk, former Balestier head coach Salim Moin (pictured above foreground) is also reportedly to take up the assistant coaching post with the Rams next year along another Tigers alumni R Balasubramaniam.