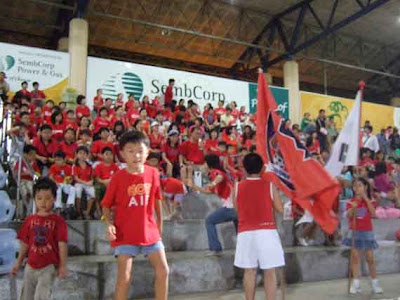 This time round from the Koreans.

Nobody expected their arrival at Woodlands stadium, until a group of 150 odd of them turned out around 20 minutes before the kickoff.

Donned in the red tops, these expat Koreans sure made their presence felt at the normally subtle side of the mainstand.

"Dae-Han-Min-Guk" (the official name of South Korea) as the group chanted with the aid of drums and water bottles filled with beans!!

Was told by their presumably group leader, these Koreans belong to a church organization and promised to "return next season".

It was indeed a nice effort by these expatriates, as their spirited drumming and cheering helped to spur the Super Reds on, whom unfortunately lost to Woodlands Wellington by a solitary goal.

Not bad eh, wished they had made their presence earlier, who knows if these "twelfth player" would have made a real difference.

What a shame but a really good effort anyway, kudos guys!! 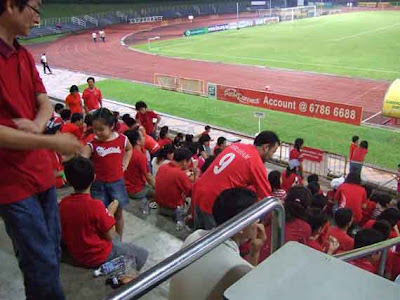 The short clip of the Koreans supporters