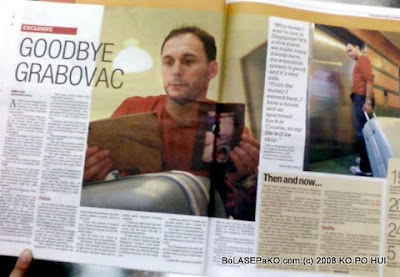 The New Paper 05th Oct 2008
Just less than 24 hours we heard out how Egmar Goncalves is, another shocking news unfold from an unlikely source - The New Paper, that another pioneering player of the controversial FTS, Mirko Grabovac had packed and went back to Croatia.

Again, the main local (European) football paper had triumphed again in bringing us another sensational story that all least expected them to do so, given their track record in recent times.

Enough said of that, it's clear in this article that the FTS scheme is once again under the scrutiny of the public eyes and things can't be help when another product of such scheme - Li Jiawei had announced her engagement to a businessman and her plan to return to her place of birth after her role in ending the Olympics medal drought for this island republic in 40 odd years.

So I think I can't blame some of those folks out there for against engaging foreign-born sportsmen for bring sporting glory to us when some of these guys are being perceived of leaving us after "their job was completed" or simply no sustainability reason to "root" them here. 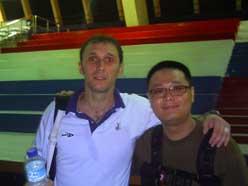 A picture with Mirko during his days with Tampines Rovers in Oct 2005
Although, I don't fault Mirko for leaving us as things are beyond his control as he still has a family to support and certainly it's time to really reflect on the FTS (as I mentioned earlier before in December 2005 as illustrated before) and hope to see the end of such sad happenings. 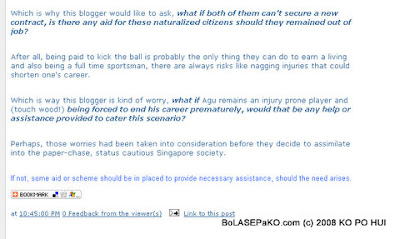