While we have this on going talks of having our players ply their trade in the foreign leagues. 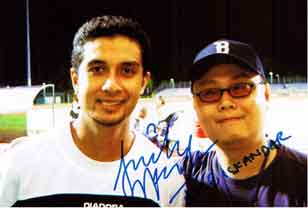 National skipper Aide Iskandar (pictured on the left with the blogger) will be heading to nearby Johor to join the Southern state in their quest to rejoin M-league elite.

Though not as shocking as what Hasnim Haron did in the early 90's since Aide is at the sunset zone of his career.

But what triggered a bigger shocker is when news were made known when prime time players likes of Indra Sahdan Daud, Agu Casmir were being targeted by other Malaysian clubs as well.

Thankfully though Indra committed himself to another long term deal with Home Utd.

As some commentaries pointed out it's never a wise move to play in the league across the causeway since there's a decline in playing standard and attendance (except for the Malaysia Cup final, which is still enjoying a healthy figure as told by a Malaccan who claimed the atmosphere being "havoc").

It came at a time when everybody are pondering if the new pro soccer league could hold itself against the other deeply established leagues of other football codes ,such as the Aussie Rules (AFL) and the Rugby League's NRL.

The Aussies, by clinching their World Cup berth has definitely boasted the profile of the fledging A-League.

So the thought of playing down under ever crossed the minds of our local players?

Their rather close proximity to us, English as the main language and the football link between the two nations is strong since the days of Abbas and Alistair, counted as some of the contributing factors on why Singaporean players shall give it a try.

With prominent players like Viduka, Kewell earning a living at EPL and other European leagues, it is pretty clear that scouts from Europe have been constantly look out on Australian talents.

Therefore, it could be an option to use the A-League as a springboard to European leagues, rather than having to travel half the earth only to be rejected despite the blessing given (here I'm talking about Noh Alam Shah's European adventure.)

After all, we're talking about rubbing shoulders with the likes of Sydney FC's Dwight York on the field and former Liverpool midfielder Steve McMahon (pictured on the left, credit:Liverpool FC's Official Site), the head coach of Perth Glory FC, off the field.

Former S-Leaguers like Stuart Young (former Woodlands), Andre Gumprecht (ex SAFFC) and etc. are being some of those players we saw here, now earning their bread and butter over there.

So what's holding back? Nguyen Truong Van's saga? I certainly hope not. However, if any Singaporean player even got a chance to be there . Perhaps their skills would eventually "heal" the "wounds".

(P.s: Many thanks to Mr Adrian Chan for picture taken with Aide Iskandar)