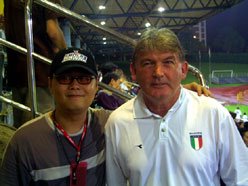 As the final whistle blew to call the end of the 2005 Singapore Cup final, Singapore football bid farewell to probably one of the finest coach that graced the land.

Steve Darby - Love him or Hate him, let us not forget those colourful moments he shared with us.

Known for his outspokenness that had restored a bit of vibrancy into the scene since the mellow down of R Vengadasalam, the former Rams manager (now at Tampines Rovers)

However it was also his outspokenness that landed him into some troubles with the league authority, which were well-documented. (eg: his comment on the mandatory Beep test)

Despite those negative issues, one must not forget he had restored the pride of the Protectors, that was badly bruised after the departure of Dutchman Roberts Alberts, who was succeed by Englishman Jason Withe, before Darby stepped in to replace Withe.

Personally, I must say thanks to coach Darby for "introduce" me to the "real world of that of a journalist", after a match last year. (if he still remember which one, hehehe)

Still for those who miss him, you are still able to catch him on the cable as the pundit for the EPL.

(Picture took with Coach Darby at the Woodlands stadium, many thanks to Mr Stanley Ho for making this possible).

New comments are not allowed.