Having listened to what Warriors coach V Selvaraj said after his side's 1-0 win over the under-strength Churchill Brothers of India in this do-or-die AFC Cup decider, I was wondering if I was at the same game as he was at Jalan Besar. 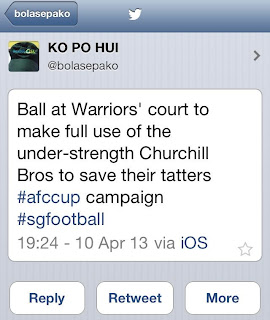 Yes, the fact was that I tweeted before the game that the ball was at the eighth-time S.League champions' court to see if they are able to salvage their tattered continental campaign, but for those 363 at the ground watching this dead-pan fixture, I wonder if they felt the same I did after the game.

Someone said this statement "No matter how good you played, how bad you played, the important thing is you win the game.", and for that I think that theory was well applied to the hosts' victory this evening.

And for the first time ever, I appreciated the activation of the Lightning Warning System (LWS) at half time to allow the cushioning of impact of that dreadful first half display from both sides.

The Warriors got off to a spirited start, actually, when they created two chances in the first two minutes of the game before they slipped into a state of oblivious that saw the once dominant side in local football being reduced a team that lacked cohesiveness and clueless in their play.

Constant yelling from the sidelines during the match from coach Selvaraj was audible with the acres of empty spaces around the ground given an impression that his team might not follow his instruction or whatsoever.

Still, when the former Singapore international gave his assessment of thoughts after the less-than-impressive win that salvaged their tattered continental campaign, he was full of praise for his squad.


Said the former striker:"It was a very important win and we feel confidence after tonight's game, as the boys begin to believe in themselves and having the trust in each other that we deserved to win.

"An own goal is still a win for us, although we created some chances, but failed to score." added coach Selvaraj on his thoughts that game's only goal was deflected in by Churchill Brother's skipper Ravanan Dharmaraj off a Ruzaini Zainal's cross from the right in the 54th minute.

Apparently, the win tonight did bring some relieve to the beleaguered coach who is still struggling in his quest to revitalize the sleeping giants of Singapore football, despite being the defending Singapore Cup holders.

In his parting shot of the evening, the former army regular concluded:"With players coming back from injury, it given me some options, as I am still not able to field my full team just yet such as (Kazuyuki) Toda, who is still injure."

(P.S: Sorry folks, no action shots from the sidelines and I thought I made a wise decision.)
logged down by Ko Po Hui at 23:57:00