This afternoon at the shopping belt along Orchard Road, the league authority put up their best effort, despite the rain, in getting several players and CEO Lim Chin to parade along the stretch in their painted bare top.

Due to work, I wasn't there to see how the things proceed, although I was told that there was a delay due to some "traffic mistakes" and can't further comment on this fanfare event that saw the CEO and the players handed out flyers to the shoppers whom they met along the trek.

The given-out flyers contained information on the upcoming Charity Shield match on 15 February 2013 and the 12 participating clubs in the Great Eastern YEO’S S.League 2013.

CEO Lim was quoted saying in the official press release following the event that "buzz we created today is very encouraging and we look forward to re-creating the same buzz at the stadiums ..."

While the turnout saw pockets of loyal supporters making their presence and helped in whatever in this outreach among the shoppers, one can't mask the massive outrage over the delaying of league fixtures with the new season scheduled to kick off on the 20th February.

According to several media reports, the delay was stemmed from the complications as the result of Harimau Muda's decision to relocate to Pasir Gudang in Johor.

Since the stadium in Pasir Gudang is also used for staging Malaysian Premier League (MPL) matches, thus the scheduling of the S.League matches over in Johor is met with difficulties in order not to clash with those of the MPL's.

From this saga, it not only highlighted the lack of awareness in crisis management on the part of the league authority and yet again to see the clubs not given the best possible platform to prepare adequate for the upcoming season because of the delaying in releasing the fixtures.

Some may argue that the late release of league schedules is nothing new, yet because this being the first under the former SAFFC chairman and the SBU that oversee the league operation, thus how much of damages had already done in denting the confidence on the new team?

Only time will tell... 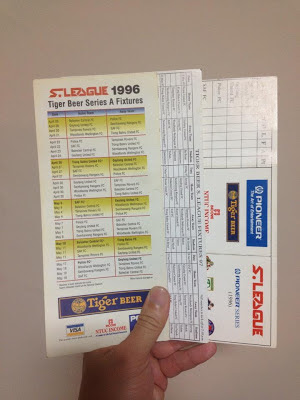 At the meantime, I can only reminisce these old fixture cards (pictured above) I found in my drawer.
logged down by Ko Po Hui at 23:19:00