(This entry is formulated based on the press release issued by the S.League SBU, FAS with pictures depicted in it came along with the said release, unless credited)

Reaffirm its long standing commitment to Singapore football, local MNC Yeo's will extend its sponsorship for the Great Eastern YEO's S.League for another three years.

Into its tenth year of collaboration with the S.League, the beverage giants had since spearheaded a few initiatives in uplifting the game standard in this country.

"As the longest sponsor of S.League, we are proud and indeed honored to be an integral part in shaping the local football landscape." said Mr Tjong Yik Min, YEO'S Group CEO in the press release issued by the league authority on the announcement of the extension. 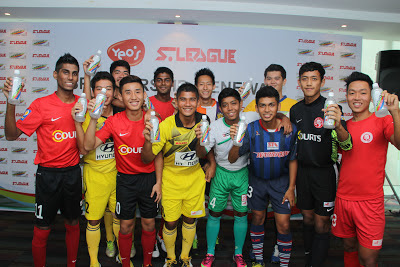 According to the same release, the football clinics held last year at various schools where students were taught the importance of hydration, nutrition by a number of S.League players will continue this year.

Beside those clinics, Yeo's, through its isotonic drink H-TWO-O, also launched a few programs during 2011 and 2012 in helping to unearth raw footballing talents such as the 'H-TWO-O Ultimate Dream Team', and 'H-TWO-O Ultimate Champions League' that saw the involvement from former national captain Fandi Ahmad (pictured below) in the process.


"The success of these programs have resulted in developing a talent pool for S.League and kindled these students' interest for local football." opined Mr Tjong on his thoughts of those initiatives.

Showing his appreciation to the extension of partnership, S.League CEO Mr Lim Chin said:"I want to take this opportunity to thank YEO'S for their strong and untiring support. We look forward to many fruitful years ahead with them.

"YEO'S commitment to Singapore football extends beyond the sponsorship of S. League and through their H-TWO-O Ultimate Dream Team Initiative; talented youngsters have been identified and groomed into the ranks of our S. League clubs." added Mr Lim.
logged down by Ko Po Hui at 00:03:00