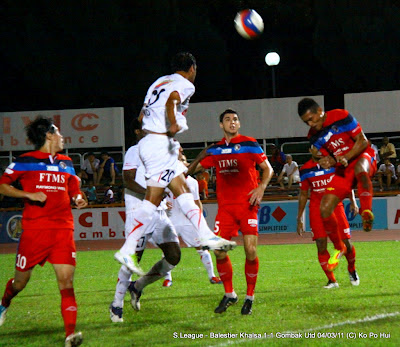 6400 is something you cant avoid when you are shooting at Toa Payoh Stadium.

Anyway, Balestier Khalsa paid the price for not able to top up their tally after Park Kang Jin scored in the first half and allowed Gombak Utd to draw level through Mustaqim Manzur in 80th minute at this game which billed as the "Gombak" Derby since a large number of former Bulls players had switched over to the Tigers this season.

PLEASE CLICK HERE TO SEE THE REST OF THE MATCH PICTURES
The floodlights were so bright that it made the whole stadium looked hazy with the setting dropped to ISO2000!

All I can say the Protectors played their best half in the second period of play with some intense pressing game after trailing a goal at stroke of half time.

The hard work eventually paid off with goals from Ihata, Mendy and man-of-the-match Qiu Li.

Little did I realized that photography is not allowed in the post-match press conference (as informed by the competition authority).

The match was staged by Bishan Stadium, instead of JBS because of another match took precede over this continental fixture.

The highlight of the match was to see the appearance of Ahmad Latiff Khamarudin being fielded for this continental fixture by Tampines Rovers, despite just two days away from the fate-deciding "beeper".

Other than were the two chances in the second half by Stags that were denied by the framework from close distance.

On the side note, the two sides decked in light colours had made things easier for photogs as it allows faster and sharper focusing with the ISO 2000 (1/4-500) setting in place.