Rizal, in his younger playing days
INTRODUCTION
Former Balestier Khalsa goalkeeper Rizal Rahman shared with us his life after he hung up his gloves in 2007 and the difficulties he faced in a new environment that is totally different from his previous job as a professional footballer.

In this Q & A as well, Rizal tells us why he pledged most of his playing career with the unglamorous outfit, Balestier Khalsa (except in 2004, when he was released to play for Home United before returned to Toa Payoh Stadium a season later) and who were the ones been supportive throughout his playing career.

RIZAL RAHMAN Q & A
1) Please tell us how you first involved in competitive football, from school to S.League level.

"Like many boys, I started out with 'void deck' football and because the primary school where I studied don't have a soccer team, so I played for the Tampines Rovers youth team instead.

In 1992, we took part in a tournament organized by the NKF where we faced the 'elite' squad from the MILO soccer school in the final.

I performed well during that match by saving shots from likes of Indra Sahdan, Ahmad Latiff Khamarudin etc. But unfortunately, we lost the game in the end.

Following that, I was approached to join this "elite" squad by the coaches of the squad, Cikgu Samsuri and Cikgu Latiff.

From then onwards, I went to play for Home United Prime League squad before joining Balestier Central (now known as Balestier Khalsa) in 1999.” 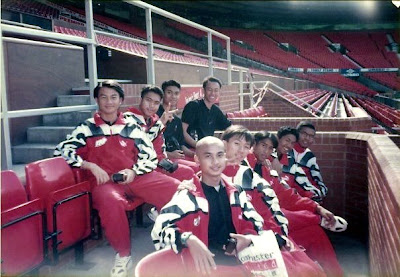 At Old Trafford, Rizal is middle of the front row
(No trouble spotting Indra Sahdan but how about Ahmad Latiff?)
2) Your decision to quit playing full-time 2-3 years ago, was it because of injury or you decided to opt for a viable career option or otherwise?

"Both reasons contributed to my decision then. I injured my ACL (Anterior Cruciate Ligament ) in 2006 during a match against Tampines Rovers, even though I did recovered.

However, at the same time I would like to opt for a stable career path given the history of that ACL injury I sustained, so with one of my team-mates we decided to make the jump into the aviation industry."

3) How was it difficult to adjust to a new career that is totally not sporting type?

"It was very difficult then, as I don't have any prior working experience other than being a professional footballer.

But I glad that my new colleagues were helpful by giving me all the encouragement and also the pressure to perform well eventually see I fitted into my new career."

4) You mentioned before that some S.League clubs offered to take you on part-time basis but you declined because of work commitments, are you aware if there's some other ex-players facing similar situation like you?

"Yes, I'm aware that one of my former team mates faced the same problem as I did." 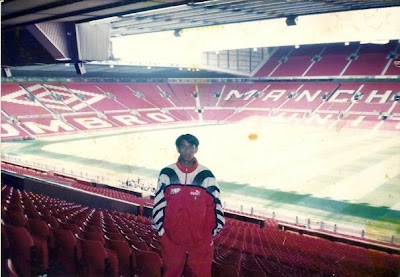 Inside Manchester United's Old Trafford home ground
5) How do you think is it difficult to juggle football and day job if you decided to accept those earlier offer?

"It will be very difficult to juggle both if one is on shift schedule like I do, but in my opinion, it may not be as tiring if he's on a 'eight to five' (office hours) job."

6) You last played for Balestier Khalsa, a team that emphasized on grooming talents than winning honours, do you ever felt a lack of satisfaction when playing for them because as professional player, winning honours is a way to motivate him to excel or you have different opinions?

"Winning medals, honours are important to a player's career but that's not everything. What matters most is the chance to start every game to prove your worth to everybody.

And for the fact that I owed a lot to Mr Thava (S Thavaneson, Balestier Khalsa's vice-chairman and team manager) for what I had achieved during my playing time, as he was always there to advise and encourage me whenever I had any problem.

And also the rest of those in the club like Karim (Abdul Karim Razzak, former Balestier Khalsa coach) and Zai (Md Zainudeen bin Hassan, Balestier's Head of Youth Development).

I guess it's my way to show my appreciation to the club by staying put." 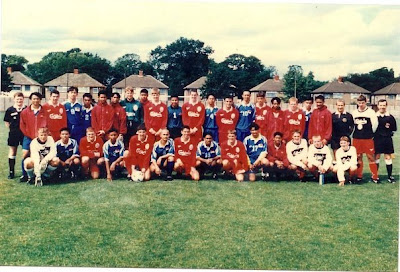 "Anyone able to spot Steven G and Mike Owen here??" asked Rizal (not me, hehehe)
7) Who was your toughest opponent you faced in your playing career?

"Noh Alam Shah, as he is so committed whenever he is on the field, his aggressive presence on the pitch is enough to send shivers down everybody's spine."

8) Who was the defender in front of you that made you felt at ease then?

"Former skipper Darren Stewart (now head coach of Gombak United) made me feel comfortable whenever he was in front of me."

9) Who were the persons that inspired you most in your playing career?

"Mr Thava, of course, other than him, my parents, my wife and one of my paternal uncles who bought me my first pair of boots and tracked my progress throughout my playing career.

And also not to forget to mention gentlemen like Mr Elangovan, my goalkeeping coach at Balestier and those who coached me during my national youth team days like Cikgu Sies Senan, together with goalkeeping coaches Cikgu Ahmad Wartam (former national skipper Fandi Ahmad's father), Cikgu Khairullah and Yacob Hashim whom had been helpful during my developmental stage as a 'keeper."

"I don't see myself coming back as a player, given the work and time constraints I facing now." 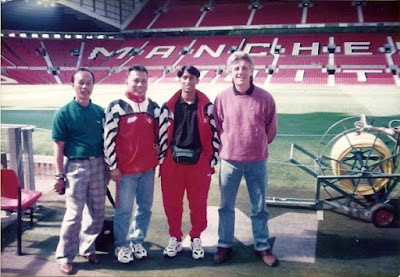 With former national coach Barry Whitbread (on the extreme right)
11) Do you still play competitive football or being involved in non-playing capacity? I mean for your current employer or in the NFL, like some former S.League players do?

"I received offers from some NFL teams but declined because of the reasons mentioned earlier.

But I do play for my current employers whenever opportunity arises, like the annual match we played against our Malaysian counterparts whom we rarely defeat till I joined the company."

12) I aware becoming a coach is one career option for retired pro players, has that option came to your mind before?

"I would only consider becoming a coach, like as a goalkeeping coach, once my current career is stable as that is the most important thing to me now."

13) What do you miss most of your playing career?

"I missed those days, definitely, like getting ourselves prepare for the games, taking care of what we eat as diet is very important part to a player and also being focused and discipline as well.

At times, I do get calls from my former team mates asking me out a game of 'monkeying' (ball passing practice)."

14) Lastly, do you still keep track on S.League?

"Yes, I do read TODAY to keep myself update on the latest happenings in the local scene."

ACKNOWLEDGMENT
I thank Rizal for making time out of his busy schedule to meet up for this Q & A session, allowing me to use some of his photos from his "Facebook" account for this blog entry.

Let's wish him all the best in his current career but sincerely hope, as what he mentioned once his career stabilize, will come back to the scene to contribute a way or another in developing next generation of talented goalkeepers like him.
logged down by Ko Po Hui at 09:00:00