FROM SITE TO BLOG

(the logo on the left commemorated the 9th anniversay of BoLASEPaKO)

I made a decision months ago to convert this website into a blog.

It came at a time when the blogging community is under intense surveillance from all corners, following some high profiled cases threw some bloggers over the sensitive remarks posted.

Nonetheless, always strive for something that never involved with those unnecessary l had decided to proceed.

The reasons of having BoLASEPaKO to convert into a blog are mainly because of the following.

So would like to shift the focus of the site rather for it's layout and graphics to more on it's contents. 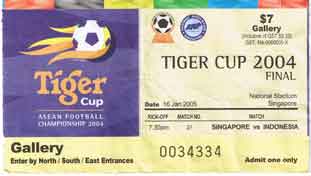 The day we were crowned as the football kings of South East Asia, by clinching the Tiger Cup in front of the sea of reds.

Unfortunately though, the third-on-the-roll failure to
advance to the semi-finals of the bicentennial SEA Games football tournament, had sent the football fraternity tumble to ground zero yet again.

The withdrawal at eleventh hour by Chinese Club Sinchi FC was "well-received" by large number of s-league supporters.

Goodness gracious, at least it save us a trip to that daunting "wild, wild west" arena.

Never a favourite among the fans and media alike, thus I don't really habour too much hope on whether how they going to promote futsal (though being a keen fan of the five-a-side version) from the scratch, when they can't even carved a niche after three years of "assimilating".

STILL DON'T GET IT?

I don't hide my sceptical beliefs about Sporting Afrique and Sengkang Punggol FC. 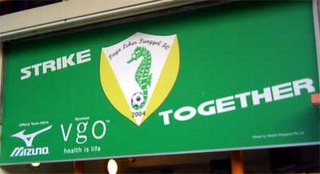 The failure of Paya Lebar Punggol (PLP) had once again proofed that hastity admit a team after a short presentation, not only is like losing a "battle of Waterloo" but a damaging factor to the league on whole.

More fans and potential sponsors will give a miss if the sorry spectacle of the Seashorses repeat again, in this case for Sporting Afrique and the newly-formed Sengkang Punggol FC (joint-venture by Sengkang Marine and PLP).

Even in established leagues, the NBA's Toronto Raptors and NFL's Jacksonville Jaguars were given ample time (from bidding to be the franchisee, signing of players and etc.) to prepare themselves before their debut in their respective leagues.

I would beg some clarifications to be explained by the league authority for the "kiasuism" shown in admitting these teams.

If not any Tom, Dick or Harry could produce a fanciful, "too good to be true" proposal and join in the fun, with the paying fans at the losing end, as always.