(This entry is formulated based on the media release issued by CROWD Pte Ltd, the PR agency for Nike Singapore)


Without any doubt, the five-a-side game has long been consider the perfect training ground for some of the world's top footballers.

In the latest media release that showcases FC247 a new range of football performance and street footwear by Nike, Manchester United striker Wayne Rooney attributed how smaller version game helps in his performance on the field.

"Playing five-a-side as a kid was a massive part of my development. It improved my control, speed, awareness and vision so much. We still play versions of it in training." said the Red Devils frontman.

Echoed the same sentiment, Barcelona midfield maestro Andres Iniesta added:"If I had more free time, I would like to train more with my colleagues of the futsal team. Futsal (five-a-side game) helps my ball control in tighter spaces."

Based on those feedback, it's not difficult to see when the team, led by Phil McCartney - Nike Football, VP of Football Footwear, were tasked to come up with the latest range of footwear, what would be the key elements in defining the design.

"When we go out and talk to athletes playing the game, we see it's not just the traditional five-a-side that we see being played en mass in the UK, but also futsal or indoor matches as well as street football." said McCartney in the same release.

He added:"Across the world players are finding more and more places to play the game. It's up to us as Nike to serve those players with the right product to play on these different surfaces."

Those insights from the players guided Nike to create FC247, that reflects the variety of surfaces the game can be played on and design innovations specific to each playing style.

"This type of athlete feedback was vital in the design process. Fast tempo matches with limited space demand instinctive touch and control with split second decision-making - skills that translate to the elite level of the sport." explained McCartney. 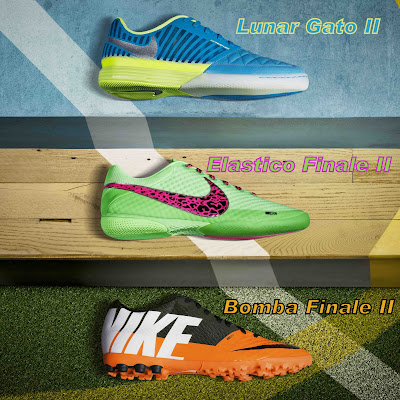 Each shoe is created to provide a balance of speed, control, comfort and precision based on specific court surfaces.

All three shoes feature new outsoles that house a flexible groove along the first metatarsal that helps free up that part of the foot allowing a quicker first-step to improve agility in tights spaces.

The new Nike Lunar Gato II, Nike Bomba Finale II and Nike Elastico Finale II are already available at Nike.com from the 1st of April and retail from SGD $149 - $159 at Weston Corporation.
logged down by Ko Po Hui at 07:30:00