Hamstrung (further) for the sake of ROMANCE

As part of the MOU, the national teams of both Singapore and Malaysia will play a two-match “home and away” series in coming June at Jalan Besar and Kuala Lumpur as confirmed by a media release issued by the FAS days ago.

According to Liga Singapura, while the dates against the “auld enemy” are confirmed, the Malaysians had already penciled a few more possibilities with the likes of Thailand, India, Australia, New Zealand, UAE, Singapore and Qatar in preparation for the defending for Suzuki Cup.

Whilst, the “Causeway Derby” has always drawn the biggest crowds whenever both sides of the Causeway (and the “Second Link”) meet, one tweet on my “timeline” popped this question - “No other team to play against meh?” (as depicted below)

I merely replied “Hamstrung for the sake of ROMANCE” in reference to the quote below by FAS president Mr Zainudin Nordin after the signing of the joint MOU between FAS and FAM in last July.


“There is always a special romance between Singapore and Malaysia football. I am pleased with this football partnership and am confident that it will further strengthen our ties with the FAM.”

Apparently, questions were asked are we squaring off only against the Malaysians in part of our preparation for the biennial tournament (as stipulated by the MOU) and wonder are we going to follow suit in getting some quality sparring opponents as well.

On the hindsight, I am not sure how much has it benefit the local football on the whole following that historical partnership that saw both sides reciprocal with a side in each domestic league for “developing purpose”.

While the Malaysians had fulfilled that with their “Harimau Muda” in the S.League, slight tweaking along the way saw the Lions XII elevated to an “Under 28” squad due to various factors beyond its control in the MSL. 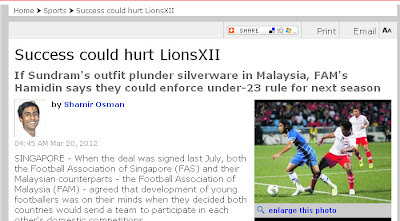 With the recent suggestions that FAM might enforced the “Under23” ruling on Lions XII because of the guest' recent run of success (pictured above, courtesy of TODAY) that really makes me wonder are we heading back to the old days where circumstances eventually led to the pulling out after 1993?

While time from time, the FAS re-assured the skeptics that “S-league will not become a "poorer cousin" once the LionsXII start their Malaysia Cup campaign.”, but the recent double-header on 20th of March saw the sharp contrast in coverage and attention had once again riled some quarters of the fans.

Less than 400 turned out at Bishan Stadium for an AFC Cup game between Tampines Rovers and Vietnam's Song Lam Nghe An (SLNA), while near capacity at JBS for the MSL clash between Lions XII and Selangor had people asking if continental exploits by our local sides is nothing as compared to the continuity of the “romance”?

Whatever it is, think throughout and carefully before being hamstrung again.
logged down by Ko Po Hui at 06:47:00

Email ThisBlogThis!Share to TwitterShare to FacebookShare to Pinterest
Classifed as: AFC Cup, S.League