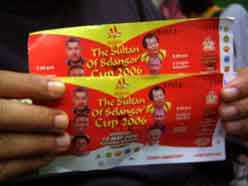 Initially when this event was first staged five years back, I was skeptic whether if this annual match featuring the best of Singapore and Selangor football, would ever stir the interest like the Malaysia Cup did in the past. 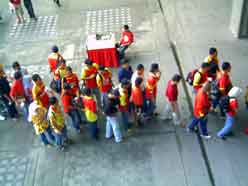 The year before last when MPPJ (represented the state of Selangor) played the S-League selection at Kallang, more than 40,000 turned out for that fixture.

Last year, I was told sizable crowd were there too at Shah Alam.

Before the main event, fans were treated to a game featuring star players from the yesteryear, which the visiting Selangor triumphed over their hosts 1-2. 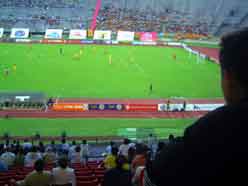 A fan watching the veterans' match in progress

Though not as intensive as they used to be more than 20 years back, these legends must be glad that there they were playing against each other once again, on the same pitch like they did back in the 70's 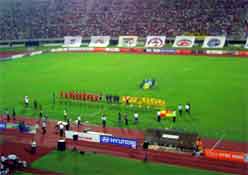 HRH the Sultan of Selangor was there to grace the occasion.

Unfortunately, it was an one-sided event that didn't complement the royal presence, with the hosts took the full honours.

After the match, while heading home from the ground, a journalism acquaintance posed the question if this match is a worthwhile event.

I recalled telling him something that maybe for the old time's sake - Yes, though l didn't quite remembered (telling him) if in a long run if it's a worthwhile event.

Judging from the crowds turnout last night, I still have my doubts after all during those days, both teams (the Lions and the Merah Kunning) were fighting for the Malaysia Cup.

Not being disrespect, as the Malaysia Cup is after all a much prestigious trophy (But l still maintained that we made the right choice to withdraw from the M-League after 1994.) 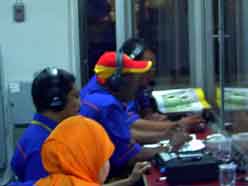 Email ThisBlogThis!Share to TwitterShare to FacebookShare to Pinterest
Classifed as: national stadium, Sultan of Selangor Cup