we would not have seen what proclaimed as the best-ever national team played and won the Malaysia Cup in 1977.

I chanced upon the National Library Newspaper archive site one fine day, and out of curious I decided to search through the site to see if I can find some of the clippings of the heydays of Singapore back in the 1970s.

The result was these two clippings.... 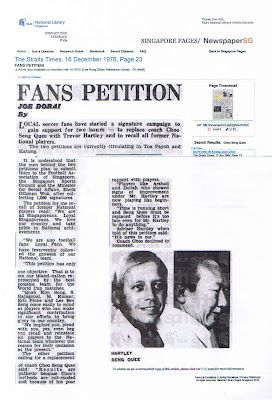 It was interesting to note back in 16th December 1976 (when I barely arrived on this earth), a fans' petition was organized to ask the FAS to replace "Uncle" Choo Seng Quee, arguably the best coach we ever had, with Technical Advisor Englishman Trevor Hartley as the national team coach.

As the disgruntled fans argued some of the players failed to perform, while urging the recall of several players back to the national team and most importantly, these fans claimed, the "poor rapport" between "Uncle" and several players. 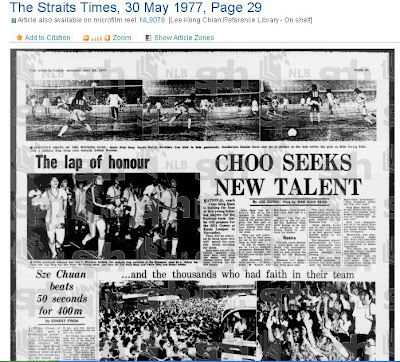 Should the petition got its way, would we see that historical day on 30 May 1977?

Indeed, one of the players, Quah Kim Song, eventually made his way back to the national team and scored the winning goal in extra-time to beat Penang to clinch that utmost prestigious trophy after a 12-year hiatus.

Once I was told when Kim Song turned up for his first training back with the national team at Jalan Besar Stadium, he was sent away by "Uncle" straight away. It was later revealed the purpose of doing that was to make the star striker "more hunger and determined" to play and it seems to work!

Former national skipper Fandi Ahmad was once spot by "Uncle" and "asked him to come over", but the young boy then was too "scare to come over", which later revealed to be one of the regrets he had for not doing that.
logged down by Ko Po Hui at 23:05:00