From "The Straits Times" 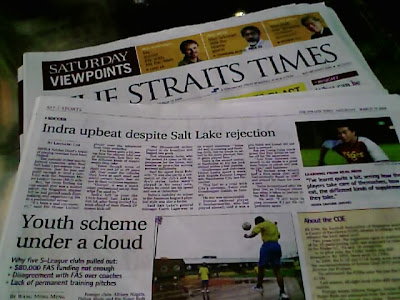 It's not usual for me to pick up a copy of the flagship broadsheet of the SPH.

And it's not usual for the backpages to spotlight on local football as well.

One of the stories being featured - the rejection of national striker Indra Sahdan by MLS outfit, Real Salt Lake.

With 3/4 of the page focused on the dearth of the COE schemes among the S.League clubs.

On Indra's rejection
Strike the iron while it's hot, if the ace striker still has that desire to play in some top-notch league.

One possible (and the only feasible) destination - Australia.

Why not? After all, football ties between the two has always closely linked and quite a handful of former S.League players are plying their trade over there (in the States Leagues and even the top-tier A-League).

The dearth of the COE schemes
Some might not find it pleasant when I said this but in regards of the dearth, I would said, "SCRAP IT!"

Since some clubs find it, either too costly or logistically hard to maintain the scheme, might as well call off the whole thing.

As mentioned before, I always believe we have a thriving school football scene but it just that the "supposed-to-be" link between the schools and the football clubs is not strong enough.

C'mon, change your mindset and embrace yourself with the raw talents waiting to be unearthed ground the buried ground, rather than let it rot away.

This way, it frees the clubs from the financial burden that comes along and allows them to concentrate on the league only.

Email ThisBlogThis!Share to TwitterShare to FacebookShare to Pinterest
Classifed as: media, S.League