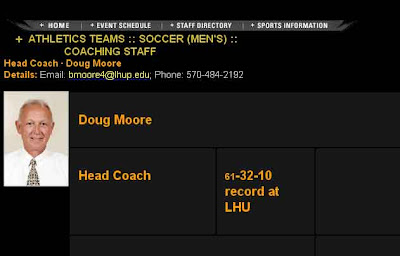 Was aimlessly surfing around when I saw an "old friend" of Singapore football - one of our former national coaches - Douglas Moore.
Dougie is currently working as a head coach in one of the colleges (i.e:"Lock Haven University") in the States.
Here's a link to his current profile, which included these lines:
"Prior to his appointment at Lock Haven, Moore was the Chief Executive Officer and founder of the Singapore Professional Football League. He served as the national coach of Singapore, leading the team to unprecedented success including the national team’s first ever Malaysia Cup victory in 1994"

What a horrible mistake! Hope it was not Dougie who told those guys about that misleading fact.