Managed to tap on to a wi-fi network while waiting for the dreaded flight home.

At least the news that I gathered that Radojko Avramovic had extended his contract as the Lions Coach for another two years, brought some cheers in my final moments in Incheon Airport (pictured below), Seoul. 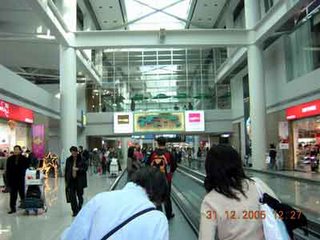 Despite the SEA Games flop that still etched in many's mind, it is still felt that Raddy is the right person to push the team to the next level.

In the past, number of national coaches had been blasted for sticking to the "same old, few faces" in numbers of crucial games.

Although faced with sceptism, the Serb-Montenegrin fielded a large numbers of youngsters.

In a gamble that paid off handsomely in last year's Tiger Cup victory.

Thus I would say any disruption in this transitional period will proved fatal if Raddy decided to leave as his successor would either had to follow up from where he left or rebuild another development program from scratch.

Now with the Asia Cup qualifers on the line and possibility in taking part in Doha 2006, let's hope the boys Will repay Raddy's faith with a better showing.