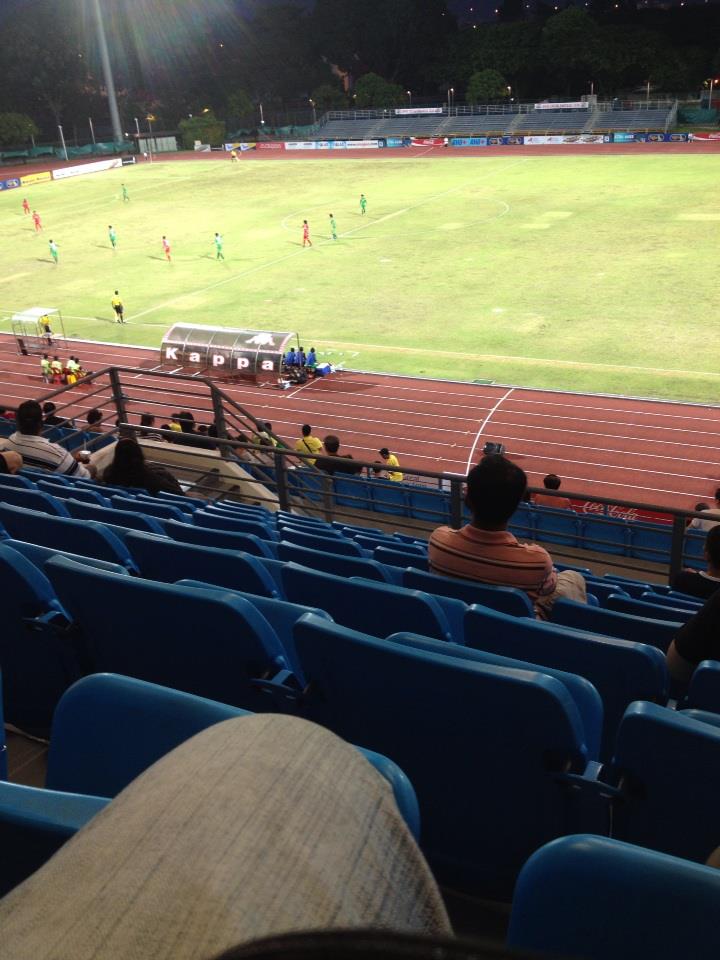 Not being able to see games of late due to work and fatigue that creeped into my body system.

Of course, the dreaded Lightning Warning System (LWS) that saw the last two games (sources:1, 2) I attended being patronized by it for some “good necessary intentions” despite the hassle, could be such a phobia to turn up at games too.

Following some astonishing results that hogged the talking point among the fraternity, I thought it would be a good idea to see how Woodlands Wellington would fare in their away encounter at Bishan Stadium, home ground of Home United who aren't exactly enjoying their best start of the year with a draw (against DPMM) following by a heart-breaking loss last week to Albirex Niigata (Singapore).

Especially, this came after the bold claim by Rams coach Salim Moin that his team have the capability to finish among the top three of the league during their pre-season introductory meet-up with the media.

Although the former national midfielder was quick to dose part of the fire when he said “after six or seven games” that he would then know where his team potential would be after saw his charges wrapped up with a 2-0 win over the Protectors in a match that was left undisturbed by LWS.

The game kicked off amid tense ambience in the Bishan camp following earlier reports (sources:1, 2) that suggested Home United coach Lee Lim Saeng and his former assistant Akihiro Nakamura parted ways on a sour note after a heated row.

So much so that during the game, the away supporters were heard chanting the name of Nakamura (a former Woodlands player too) towards the direction of coach Lee, who was spotted standing up, gesturing and pacing along the technical area throughout the match.

It must be an uneasy night for the Korean for having to see his under performed team against a much-improved Woodlands that saw the likes of Rosman Sulaiman and Shariff Samat, who ironically played under Lee before, having major roles in the upset.

For Rosman's case, it was his goal that saw placed the visiting side on the pole position, but the biggest credit should go to Shariff for his crucial clearing off the line in the 10th minute to deny a certain goal for Home United's Japanese import Masato Fukui.

The effort was defined by coach Salim when he agreed with this blogger being the “turning point” of the game during the post-match presser, “I couldn't image what the game would turn out to be should that went in” he added.

“It was a good game plan that was carried out, the desire to win for tonight's victory and I always told my players to play their best and believe in themselves” concluded the former Balestier Khalsa head coach on the upset win over one of the local powerhouses.

Meanwhile, his counterpart cut a solemn figure when meeting the press after the match.

In his usual stance after a bad day at work, the former Korean international was quick to take the rap for the poor showing.

Said coach Lee:“It's my fault and I don't think I can sleep well tonight because I will be thinking of my team that I will take responsibility of the loss this evening.

“I think we need to have more concentration in the game, create more passes to the final third of the field and for that we will continue to do these during our trainings and practices.” as he sums up his thoughts before making his way out.

For the record, the second goal of the evening was scored by former Dutch international Khalid Hamdaoui and saw the sending off of Woodlands' Moon Soon Ho with Indra Sahdan Daud and Masato Fakui from Home United as well in the closing stages of the night.
logged down by Ko Po Hui at 00:49:00