"Come back to Liverpool, leh!" he said.

"Not in the near future or never at all..." I said as I bid farewell to a new friend who I met at a pub near Suntec City. 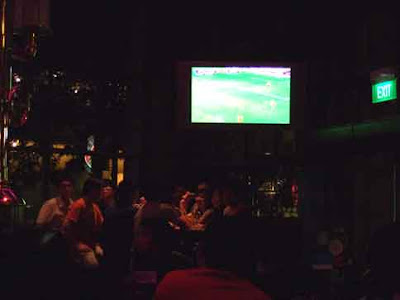 (Picture)The pub's plasma was showing the live telecast of an EPL match between Liverpool and Derby County.

This new friend is a Liverpool supporter, while yours truly USED TO be an Anfield faithful.

"Used to be" in a sense that I am not longer have that "feel" or "attachment" towards the most successful English football club since early 90s'.

It was an awakening call when I realized what the Reds mean to me? - NOTHING...

Nothing at all... They don't actually know who we are, where we are from, but when to pay rise we "contribute generously" to them via the high cable TV subscription charges we need to fork out every month. 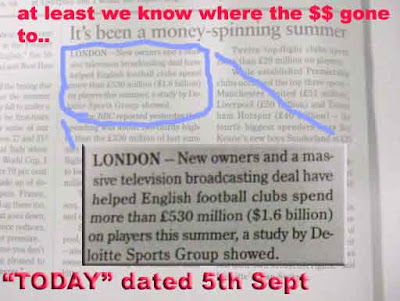 Bah! As I recalled months back the cable operator was going to increase the sports channel subscription that I wasted no time and rung up to cancel with immediate effect.

Simply the fact that I had enough! Why subject ourselves being skinned by these already wealthy folks?

On the same day, just few hours prior to the pub session, I was at the Nike outlet inside Marina Square.

"Do you sell THE NATIONAL TEAM jersey?" I asked.

"Singapore one lah!" I said.

"Sorry sir, we don't have it here." confirmed the sales person.

Pretty disappointed as it seems we still have folks regard England as their "national" team despite being a sovereign state for 42 years.

The government must be sad to hear this, as it could have signal the failure of the "NATIONAL EDUCATION" policy?? (hope I don't sound serious)
logged down by Ko Po Hui at 19:22:00