"Do I need a copy of dictionary beside me when I intend to buy a ticket online?"

That was what that gone through my mind after not once but thrice received the similar reply (twice verbally and once online) in regards to the ticketing terms defined by the ongoing SEA Games organizers in my futile attempt to get some tickets to those football matches that involved Singapore U23 side (Cubs).

At the time of writing this, the match between the Cubs and Indonesia on 11th June is declared "SOLD OUT" when I logged on over the past weekend.

Whereas, ticketing status for match against Cambodia tomorrow (8th June) is defined "unavailable", similar to that of match against Myanmar when I called to clarify days earlier.

On both occasions, the hotline staff replied "tickets are not available for sale as for now, until the organizers decided to release more for sale and advise to check the (ticketing) website for update."

"So, when we can know any update of the status?" I asked.

The staff replied:"I am sorry, I don't have the details now."

"But, the game (against Cambodia) is two days away and left tomorrow for being a day, and you can't expect the release to be hours before the kick off, right?" I quizzed back when I called yesterday.

Other than those SOP replies, I doubt there's no other commitment I can get from the organizers which I gathered from others having the same response as well.

It is such a let down to have something like this taking place where the lack of transparency had thrown everyone into a confusion when all I am asking for is if the tickets are still available and I would be appreciated a straight "YES" or "NO" and full stop.

Rather than having to check the status on the ticketing site on and off, as suggested (as if, everyone has the time for that).

To make a mockery out of the whole issue, there was a feedback of empty seats spotted in the Singapore's match against Myanmar despite a "sold out" as claimed by an online source. 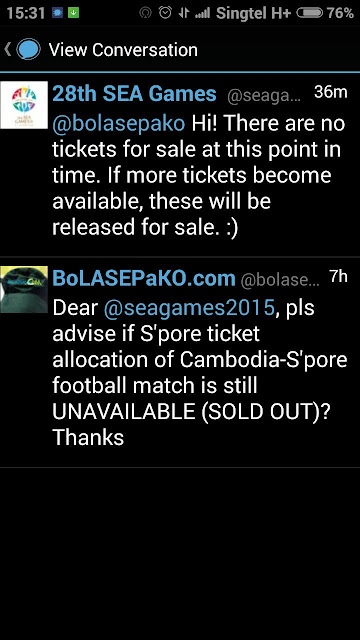 And when I got this answer via twitter earlier on the same question I asked pertaining to the Cubs-Cambodia game, I think I shall rest my case for now and should have study hard during my school days to understand the terms between "unavailable" and "sold out".
logged down by Ko Po Hui at 19:45:00