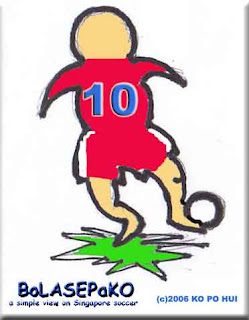 With nothing to grip on,
Barefooted, with one leg bendng struggling to stand firm on the ground,
While another foot, trying to balance the ball
The green patch beneathe symbolized the lack of spaces we facing now.

- This is the 10th anniversary of BoLASEPaKO

After 10 years
This blog entry is significant in a sense that it marks the 10th anniversary of BoLASEPaKO.

From a monthly updated site to opt for a more flexible approach offered by a blogging format, is the major transformation of the humble little site.

The decade-long existence of BoLASEPaKO witnessed the "come-and-go" of many promising local football websites that closed down fast before it's able to stand on its own.

It is all boiled down to passion, the focus and keeps within the means, that see this cyberspot last to this day (which is something I proud to say that).

Take a break when any sign of fatigue occurred, helps to rejuvenate the spirit, doesn't matter if the crowds decided not to come back if it is not update for a period, even there's only ONE visitor to the site - it meant there's still someone looking at it.

What a mess!!
We shall remember this eleventh season of the S.League as a "messy" one.

Rescheduling of the fixtures due to the pilling up of tournaments involved the teams, resulted the constant changes had to be made to the league and cup games.

I guess the folks at Jalan Besar are scratching their heads to find near perfect solution to address this issue. (Near perfect that is, as we can't please everybody)

Head for more adventurous outing, lah!!
The Young Lions, in the goodwill of fostering better ties with the Malaysians, took part in the Malaysian FA Cup.

So does it explained why a team who had commend an unassailable league at the early part of the campaign faltered as the season progressed?

While they may argue being youngsters and the elite youth players of the country, it is a good way to test the endurance and strength but having said that, one must remember these boys are human beings too.

Rather than taking part in other's domestic tournament, would it be feasible to take part in regional invitation events such as the Merdaka tournament in Malaysia or the King's Cup tournament in Thailand, where much tougher opponents are standing by? 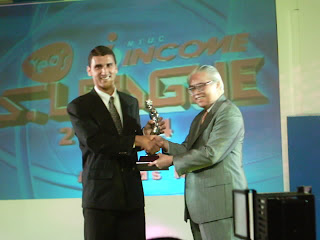 We will say goodbye to Egmar Goncalves of (or rather former) Home United.

Sad to say, after more than a decade, we had seen the last of Egmar in Home United jersey.

Thanks for the memory man.. It will take sometime for us to come to term that the famous number nine is not longer at the Bishan stadium.

Wipe out the "freeloaders" for the “Privileged” 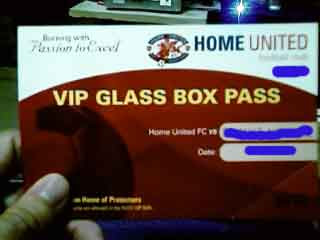 It’s something whoever involved just don’t want to admit or face it.

Sometimes, I really wonder those “familiar few” spotted at the VIP areas, who were they actually? What contribution they have to the game? Fill up the numbers? Or just to say “hi, how do you do?”(Come on, you know who they are and why they always at the ground on matchdays, if you are observant enough.)

Those seats occupied by these guys were being wasted; shouldn’t they put to a better use by the hosting clubs by package them into part of the hospitality programs that can be offered to corporate users (it’s all about mileage and brand exposure)?

I just wonder why these potential money spinning ideas, commonly used in overseas, have not been used or try out?

Though, it may not part a huge chunk in the clubs’ revenue but it would at least help to balance the books, if well-planned and coordinated, instead being like a “rationing line” during the half time reception.

The naturalized Lions
I was one of those strongly favoured the use of naturalized players to play for the national team. 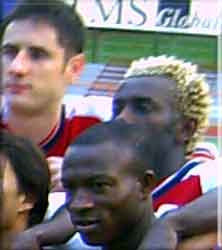 After the mess created by Agu Casmir since the start of the year, I wonder if I'm still a firm believer for this scheme.

It has and will be a good lesson learnt for all when come to offer the red passport to such players, though I do feel sorry for those other naturalized players as they might be stereotyped by the others.

But I glad the fact other than Agu and Itimi Dickson (who skipped the first centralized training on Hari Raya Haji), the rest have been on the "good book".

Enough of the nonsense, dude!
Isn't sad (or joy to some) to see the future of Sporting Afrique hang in a balance?

The African-based team, led by former TV actor Colin Chee, might have seen the last of its days in their S.League adventure.

I still puzzled by the fact that the league authority is still so "kiasu" in pushing in new clubs into the foray in a pace that the "paint is still wet".

We seen Paya Lebar Punggol (merged with Sengkang Marine after their inaugurate season) and now the Flamingoes. Surely, is not what we all want to see eh?And still to this day, we have yet to hear from the league authority of such “kiasu” act. (Made the same plead last year)
So why are we still having this trend repeat again and again? Frankly, I'm sick of it!

I have nothing to say or wish as it just keep repeating so no point.
logged down by Ko Po Hui at 00:00:00