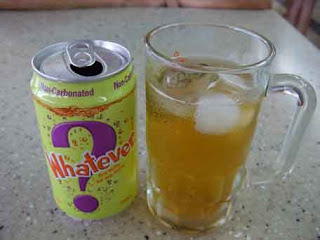 But when I saw this can of "Whatever?" soft drink, I wonder how a strange sounding name will ever make its presence in the market?

Coupled with its intensive advertising on all media, it seems that "Whatever?" and its sister brand "Anything?" had captured everybody's imagination.

Branding - a key to its success?

Sports branding is something new here in Singapore which I see as an untapped area waiting to fulfill its potential.

Having we heard that not long ago a well-known furniture/electronic goods retailer was negotiating with the relevant parties to sponsor a S.League club (since then, heard nothing about, so take it as gone-case).

Which is why, back track a bit here, the success of "Whatever?" somehow had shed a few thoughts on how we could learn of this gimmick.

The advert of "Anything?"

The advert of "Whatever?"

It appeared that the trademark owners of the "Anything?" and "Whatever?" had decided to venture into the beverages industry, so they decided these wacky names are to be used as on the soft drinks they produced.

Likewise, when J-League was launched more than a decade ago, I recalled spotting the logos of the league and the clubs appeared on the package cover of a consumable product.

Instead of relying solely on the media to raise the profile for themselves, I think this is a good way to generate awareness for the league and the clubs.

Making use of these products to draw the attraction with some innovative gimmicks should work (am I being naïve here or staying positive? As these ideas should have been thought by those "know-how" right?) 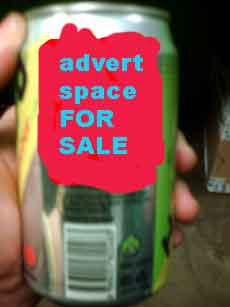 Furthermore, we have a soft drink manufacturer as one of the league title sponsors, why not having the logos or star players' face being pasted on those can of soft drinks.

Some gimmicks like games or lucky draws which can "force" the consumers to attend match at various stadiums, thus en-route them to win the ultimate price.

For example: collect five pull rings of one particular soft drink, collect a free match pass to a particular fixture which somehow reveal a clue/hint during the match to the ultimate price.

Therefore, this consumer while trying his luck to win the prize and at the meantime, is able to catch some actions live at the stadium, thus enhanced the profile of both league and clubs (whether he like it or not is another issue).

Of course, detractors bound to say stunts tend to wane after everything is over. This is why and where the hard work begins.

"创业难,守业更难"(it's tough to set up a business, to maintain it is even harder)

If this kind of stunt works in pulling in the crowds, then it's all up to players on the field, the club personnel off the field to do their part in maintaining the hype.

Frankly, we already wasted two chances on doing so.

(To be continued... If not, you folks will be drowned in the words..hehehe)