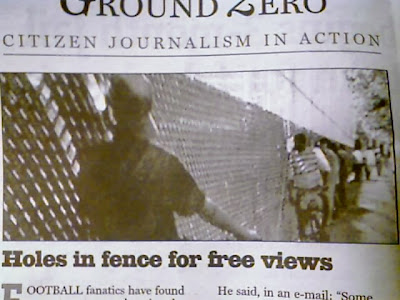 The Problem...
The picture above should tells us the story that why some stadiums are sparsely occupied when these folks can sneak a peek from any of these chinks.

The is one of the many methods some folks can watch the game for free.

Not much help can be done even with this fencing in place to stop these freeloaders.

At some stadiums, due to its strategically location, it's a common sight to see fans catch the game from the comfort of the home!

Nobody should be blamed for this unfortunate happening as these grounds weren't built solely for football purpose, rather a venue for the public to have their work-out.

Sometimes, I do wonder if this is a problem

The Solution?
But here's one solution I can think of, however, whether is it feasible we would like to see some of clubs keen to take up this proposal.

It happened last year, when I read that a large MNC had annual "family day" not at those places of interest but at a basketball match which featured Singapore Slingers playing against one of the NBL teams in the Singapore Indoor Stadium.

And that was the Slingers' biggest crowd that season.

Now taking a cue from this initiative, have this innovative idea ever come to our mind - hosting a large-scale corporate outing at a sporting event?

It would a refreshing change of idea by having such event at any of the S.League matches near your workplace, home or whatsoever.

As mentioned in my earlier blog entries (ie: "I'm not a marketing man" series), clubs should opt for the initiative to venture into the hospitality line by marketing themselves more than just a football club.

By engaging large corporate organizations to have event such as their "family day" on match days will see huge crowds turning up at the ground in hordes, isn't a good way to promote the league, which is largely ignored by the main streamers (i.e.: the fans and the media).

The players, of course, have part to play by playing to their full potential to repay the corporate entity's gratitude for having their staff at the ground to give them the support.

It's also provide a good opportunity for the clubs to learn the ropes on how things should be done in hospitality industry, such as ushering, catering, coordinating an event on a large-scale basis (help from some "know-how" would be appreciated).

Some of you guys might find it weird of having me combining these distinctly contrasting ideas together but it is the reason why I want to stress my point - remain as the way it is, it's better rot that way.