Over to you, Coach Raddy... 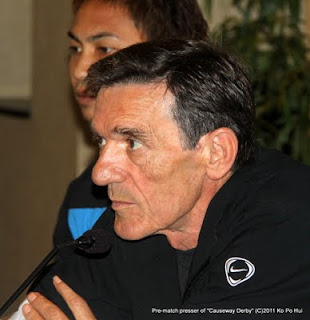 National coach Raddy Avramovic (pictured right) has been pretty quiet of late since he was named as an advisor to the Lions XII team months back.

With the media attention being shifted to focus on other issues such as the "come-and-go of Johan Gouttefangeas", the ongoing fixation on the tournament as the result of the joint-MOU signed last year, everyone seems to have forgotten about the concluding match of the faltering World Cup qualifiers against Iraq in Qatar.

It wasn't until recently when coach Raddy called up a group of 25 players for a centralized training session beginning this coming Sunday in preparation for the Middle-East journey I think many would have long forgotten about (after all, who would bother after the big gamble that failed to reap any dividend?).

A glance at the year long schedule issued by the league authority had indicated that the only work left to be done is to concentrate on the AFF Suzuki Cup at the end of the year for coach Raddy. 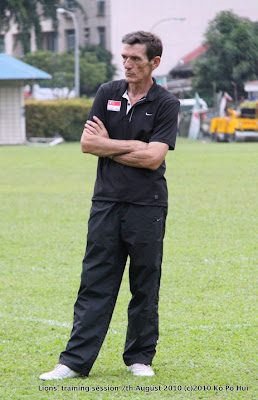 As compared to recent years, the calendar on his desk would be circled with tournaments, qualifiers such as the Asian Cup, SEA Games, etc. and I am not sure if it would be a sign to allow the longest-serving Lions coach in recent years some breather to work out his plan quietly away from the spotlight.

It was only until recently I was informed that while Suzuki Cup allows players to earn cap to their individual accolade when representing their country in this biennial regional tournament, it does not award any point to these countries taking part as it is not an AFC organized tournament.

So which is why someone did suggest months ago to make use of those "FIFA dates" to organize friendlies against other national teams to gain the much needed international exposure and also accumulate those ranking points to push the Lions up in the FIFA ranking (which is now at position 148 - as on 15th Feb 2012).

After all, a better international ranking would help to place Singapore football in a favourable position instead of being seen as a "backwater" area of the game.

Having said all that, however, I think better quality friendly opponents would be best to see the Lions learn the hard way, rather against some minnows that give unsustainable sense of achievement.

Hope to see that "old" Raddy that shown us the guts to bring in some more unproven youngsters to form the backbone of the team in his early days again and those who are still willing to don the red top.
logged down by Ko Po Hui at 00:22:00