By Ko Po Hui May 10, 2011
(P.S: What 'thing' some may asked, but for those follow this blog long enough should know what "that thing" I referred in the following entry, as I promised never to mention the word in reference to "that thing" on cyberspace.) 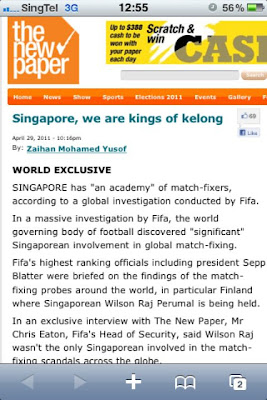 Aren't we all not disappointed when The New Paper broke the shattering findings by FIFA that named Singapore as the hub of "that thing" (pictured above).
Anyway, it seems that our football had sunk to a lower low with such allegation in a time when we are still trying hard to clear the existing debris and now found ourselves in a deeper depth of the piling up of the mud.

In response to that FIFA allegation, a FAS statement issued to an media enquiry last week affirmed their stand on curbing this cancer.

"The fact remains that Singapore has been effective in addressing match-fixing and that these undesirable elements are going elsewhere to ply their trade." reads the statement published in Mediacorp's TODAY newspapers.

"Our sponsors and partners are also supportive of the robust measures that have been adopted by Singapore, coupled with FAS being acknowledged by the AFC (Asian Football Confederation) and FIFA for being the leading member association in effectively tackling this cancer, is positive for the business and football development of our game." concluded the statement in its usual pacifist tone .

Already, the fans' blog of the defending champions, Etoile FC - "Etoile FC Fans" queried in their recent posting that if adequate protection is given to those in need, especially there were reports of case of some players had fallen into financial hardship that would make them "prime target"to "that thing".

(Pictured above) The key now is to keep those fans who are still having faith in the league before losing them in uncertainty like now.
At the end of the day, whatever things said in the past to remedy the woes were already said, now it's time to press for the need to turbo-speed up the process to rid the problems that are already entrenched into the system, which I do admit that it's so difficult nowadays to convince common folks out there to fork out $5 to come down when such allegation took place.

Maybe, as a tongue-in-cheek, my follow blogger Haresh Deol in his "Foul!" blog, sums it up with this one-liner of his "And people claim Singapore is clean? (sic)" at the end of his entry on the FIFA findings.