So is the tag of "Asia's top ten leagues" a justifiable one?

Today, we have Mr Neo Chee Seong who describe himself as a "long time S.League fan" pen his thoughts on the S.League since its inauguration in 1996.

Many thanks to Mr Neo for sharing his views on the league.

So is the tag of "Asia's top ten leagues" a justifiable one?
Neo Chee Seong

Ever since the inception of the S-League in 1996, I have been to countless of matches. However, as the years goes by, what I can say is the league is becoming a dead league.

In the past, an average S-League game between Marine Castle and Clementi Khalsa will draw you about 2500 spectators. But in recent years, attendance dipped below 1000, sponsors going away, and all we depended on were rich daddies like Mr Teo Hock Seng, and Mr John Yap (just to name a few) who came out with their own money to support the club.

The teams we brought into the league are getting worst by the day - less Etoile FC who were crowned champions on their maiden attempt.

But that's with 25 foreigners. How can they not win it? In Sporting Afrique, Sinchi, Dalian, Beijing, and Liaoning? Its either poor management or match fixing or violence overcoming these teams. 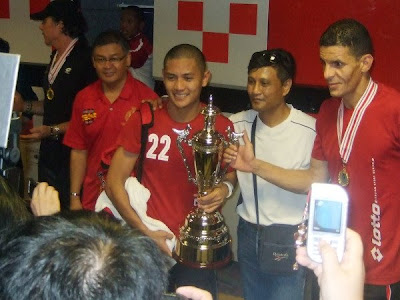 I would say Brunei DPMM (pictured above after their 2009 League Cup win) and Yishun Super Reds are 2 other quality teams but they too had their on set of problems. FAS rather creates "employment" for 5th grades "ang mohs", and not save their own local players' rice bowls. Simply unacceptable.

After the end of this year, we would see FAS strategic plan of GOAL 2010 not being achieve and isn't it time for the management team to sit down and do something?

Players in Singapore usually get into trouble unnecessarily and waste their careers just like this. Is it worth it?

I believe it is partly due to the character of each and every player but if the S-League is of a higher standard where they can portrait themselves as "professional" footballers, they will be able to present themselves well. This may be a fallacy but I feel in some way or another, it is true.

This season serves as a superb wake up call for FAS. It doesn't show anything when the team you recently brought in wins the S-League and it means you are successful.

(Pictured above) 2010 S.League champions - Etoile FC
To me, I feel the humiliation of being a mockery. After winning the S-League, they are intending to go "on sale" for all the players. Is that the right way to do? So what do you reckon they feel about the S-League? Do they really bother?

All they want, is to come showcase their talents, in order to get some better offers from abroad. I go into a Singapore pools outlet and heard an uncle say,"Singapore football, sia suay(disgrace) la, give French win everything."

Being one of Asia's top ten league. I do not know what the hype is about for this. let me name you some.

So is the tag of "Asia's top ten leagues" a justifiable one?
What else?

The media is also another source that cause our downfall. I bought a copy of the newspaper which is known for its extensive football coverage and hoping that there'll be some write up on the Singapore Cup Final (on 14th November).

To my horror surprise, ZERO coverage and that is a paper that is famous among youths, football fans and sports enthusiasts. But none of the information were pass down to the correct channel The entire sports team ought to be SACKED. its either they don't bother, or they simply don't bother. no difference.

Players going abroad has been an on going trend. I assure you, during the off season, you will bound to see some more.

I can't write any more, because it will be never ending.