No... I'm not talking about the result.

Rather, the picture below should tell you the whole story. Some undesirable "lobang" (patches) were found near the center-circle of the field!!

Meanwhile some thoughts were gathered from the blog facebook group on the unsightly appearance of the CCK surface.

Amazing for such a prestigious facility to be left in such bad condition. Looks like some worm has infested the pitch.

It has been like that for at least the last three matches there if not more. Absolute disgrace for a champion (SAFFC) team's home pitch!

Problem here is that there are few true 'groundskeepers' here in SG that know how to care for grounds (as opposed to just dumping soil on top).

Bad weather = waterlogged pitch=closed pitch in most cases in top pro leagues...if anyone was really serious! 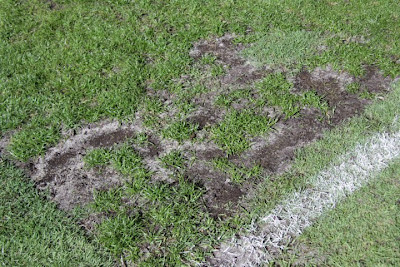 Indeed, playing surface as what we saw last night at CCK was unacceptable as what the official match reported had suggested.

If both teams were hoping to play a passing game, the state of the ground would have left them disappointed, after several large patches appeared to have been badly blighted by insects or worms that had eaten the grass bare.

Yes, I do understand that CCK stadium like any other SSC-owned is meant for public usage and not solely for S.League football itself, yet we should not ignore such a problem as what one player complained the field that "It's killing e players..."

Just a day after I posted this entry, I received an email from Mr Paul Kung, who last contributed an article to this blog in last August. Below is his thought on the pitch maintaining in sports stadiums in Singapore.


Of Grass and Glass
Paul Kung

The recent state of the Choa Chu Kang pitch at an S League game was not much a surprise to those who regularly play any kind of semi organized field sports on the fields 'upkept' by the Singapore Sports Council.

Most times, fields are rented for sport, and most teams are greeted with either sandy dust bowl areas of bumpy pot holed 'grass' fields or padi field like conditions with thick viscous mud. This of course depends on the season, hot or wet.

SSC Sports pitches, and even those privately owned rental pitches are notorious for being the worse place to play any kind of field sport. Try playing football on the old Farrer Park a hot day after a wet afternoon and you will risk your ankle being broken by a freshly baked in pothole.


One wonders then why artificial fields are so widespread here in Singapore. Many cite the weather as the main reason, while I for one say the reason is poor technical ability. How can we be a sports hub when no one wants to care for the one thing that is important for sports?

My friend paid a whooping $5000 for this, and also was told that this contractor was approved by the MOE and SSC.

Imagine the shock and horror of the teacher when the job was done and the contractor left the teacher to a green field with rocks, cement blocks, ceramic pieces and even glass.

The occupation 'groundskeeper' seems to invoke the image of an old man cutting the grass with a "parang". Well, if you look abroad, the grounds keeper of the top stadiums are specialists in their field - they are trained to spot weeds, have the right machinery to do the job, and more importantly, know that the care of such things will lead to better play on the pitch.

Most sports grounds (dare I say all) here are merely sub contracted to 'experts' at the lowest price to construct and maintain the fields. A friend of mine who works in a school had to consult one of these self proclaimed experts, who said that he could guarantee him top grade soil to repair his school rugby pitch. My friend paid a whooping $5000 for this, and also was told that this contractor was approved by the MOE and SSC.

Imagine the shock and horror of the teacher when the job was done and the contractor left the teacher to a green field with rocks, cement blocks, ceramic pieces and even glass. There were bits of it everywhere, and buried deep into the ground. The teacher had to get his students to sweep the field for a month and hand pick the bits, all 30kgs worth of construction debris! Seems that the good quality soil was from the dump at Sungei Gedong or somewhere like that.

And my personal knowledge is that most fields in Singapore, even the ones used by the S.League teams are maintained by such contractors!