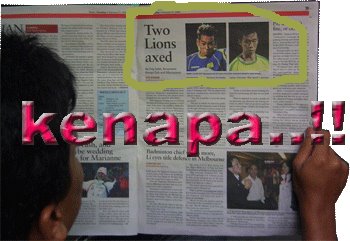 Is the Myth Broken?

What a way to draw the attention of the fans.
A day before the kick-off of the Asian Cup qualifier against the Iraqis, news broke out that Woodlands duo Mazreswan Masturi and Goh Tat Chuan were axed from the national team, for breaking the curfew.
Not surprised that the former was dropped (as former coach Jan Poulsen did that to him before due to poor discipline too) but was amazed that a senior like Tat Chuan was shown the door too.
Making the news more intriguing is the statement quoted by the midfielder.
Not known for his outspokenness as this is a player who let his game do the talking.
By mentioned that some players "have a worse attitude" and went unpunished for "missing training", it had opened some rooms for imagination and speculation.
Is the Myth Broken?
As it's been a long time that thing like these were mentioned.
By spilling the beans in the papers, it seems to diminish the fact that the team is working as a cohesive unit (at least until now I used to think that).
Although the FAS had treated the matter "closed", the scar will remained as it goes.
A colleague of me commented that it was a "harsh" decision to drop Tat Chuan because of he had a compassionate reason for breaking the rule.
This colleague further commented that Rams star should apologize to coach Raddy and team manager Eugene Loo, instead the whole team because "they are the captains of the ship".
Definitely not something the fans would like to see before the kick-off while I don't rule out the possibility that there will be "relevant follow up" to this saga.
logged down by Ko Po Hui at 19:39:00