"Leeching off" a free game 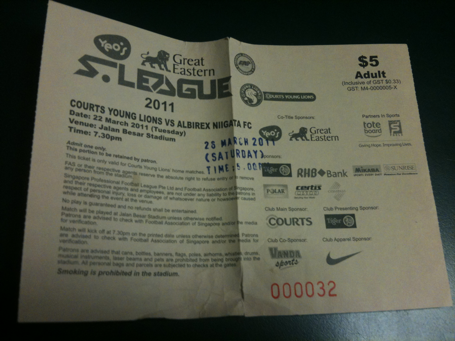 Before the game between SAFFC and Etoile at Jalan Besar Stadium, I met someone I know just outside the ground, along King George Avenue and had this brief conversation (as below).

Acquaintance: "Do you have free ticket?" as he's aware of my involvement in the scene.

Acquaintance: "Cannot be, last time my who work as a photographer, always have free tickets to matches"

Me: "Time changes as different people are 'calling the shots' now."

Scene like this is not uncommon, but it is already becoming an annoying problem which I long attribute to the liberal policy of giving out complimentary passes that led to this kind of "leeching" problem.

Perhaps, in the first place such a goodwill was to gather more awareness by offering free admission to fans to certain games.

But the danger part as what mentioned had it developed into a burden that resulted loss in revenue to accommodate these group of spectators.

I am not sure if the league authority should come up with a more stringent policy to govern issuing of complimentary passes.

As someone pointed out to me, by liberally giving out complimentary passes would be degrading to the league and doesn't accord the kind of stature rightfully for it.

Furthermore, would it be fair to those genuine fans who are actually paying to see the matches because they want to, rather having those "leech" who are here for a gate-crash?
get your instant update of this Blog!!
logged down by Ko Po Hui at 12:23:00