PREVIEW
Home United's fate in the AFC Cup will be determined by the outcome of this fixture after their away defeat to Vietnamese club Binh Duong.

However, Mr PN Sivaji's men should take some comfort for the fact they had not lost their last two games since that lost in Vietnam, but there's no room for complacency as the club jolly well know that further participation in this continental tournament means a victory at all costs against this Thai side.

If not, they will have to redefine their direction after this. 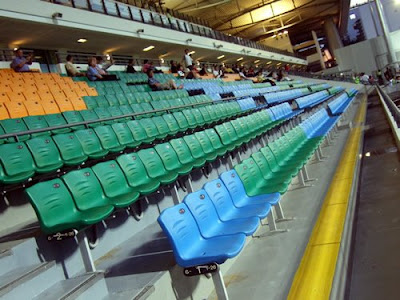 To be fair though, I snapped this before the game.
Is “pathetic” the best word to describe what I saw at Jalan Besar Stadium?

I got a creepy feeling that it would be a poor turnout for this crucial AFC Cup tie.

After all, the news was all about Liverpool coming to town in July and the back pages were splashed with news of that “$88 to rest your bums on the benches” at the National Stadium, so much so that this match was given “ two lines” in the Straits Times and nothing on the other papers. 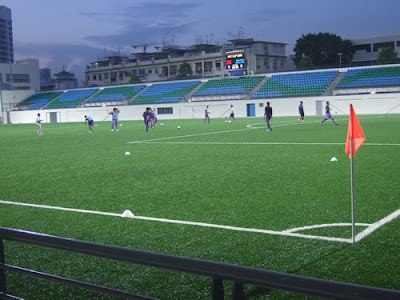 PEA warming up before the game.
A check with two fans at the ground and both feedback that they got to know this game from the Straits Times and one went on saying he was “here to support local soccer and hope to see Home United to the next round (of the AFC Cup).”

So the game went ahead and played in front a near empty ground (the word “near-empty” remember the last ACL games' attendance? Perhaps because the AFC Cup isn't as glamorous as compared to ACL). 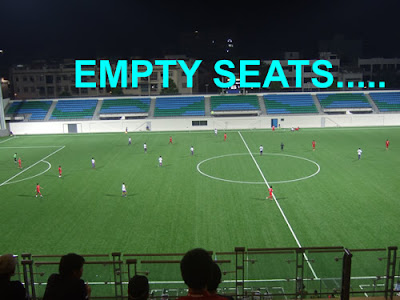 In the end, the game ended with a 3-1 victory to the Protectors who are through to the next round, while the PEA suffered another setback in their continental adventure after they were knocked out of the ACL play-off earlier of the year to SAFFC that saw they relegated to this second-tier club tournament in Asian football. PEA coach Sampahangsit Thongsuk (above on right, with his translator) said,"It was a good game, good plays and many of our players are injured that we had to make some changes and positioning in our lineup.

"Also, the playing field is not to our favour because my players had to run more and get tired easily and for the fact that Home United got better players than us." 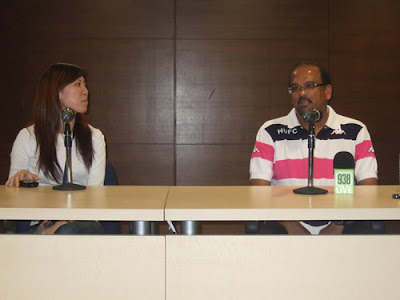 "Like I said before the game PEA are a good side" said Home United's coach Mr P N Sivaji (above right) after the match.

"Of course, I'm delighted with the win because at some points of the game they were controlling the game.

"And I guess it was a psychological boast when we took the lead in the 45th minute when Peres (de Oliveira) scored that free kick" he added.

"It will be injuries and illness that I fear the most" said the former national coach when I asked what will be his fear now with the fixtures pilling up.

"Players tend to get weaker after the game with a weaker immune system, that's why the club have been very good in providing rehabilitation facilities like spa and the (players) rotation system in place has been an important factor as well."
logged down by Ko Po Hui at 21:05:00